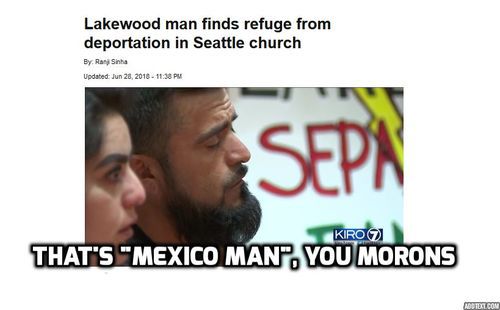 Church Provides Refuge For Illegal Alien But Not For Homeless Citizens

A "Lakewood man" finds refuge in a Seattle church to keep from being deported to Mexico according to Seattle KIRO 7 news. The Seattle Times headline reads, "Father of three takes sanctuary at Seattle Church to avoid deportation." Fox news got it mostly right by calling him an undocumented immigrant.

The Lakewood father of three, also known as an illegal alien, left Mexico and moved to the U.S. over eighteen years ago. Jose Robles, the illegal alien, has two daughters who are DACA recipients and one who is an anchor baby.

The illegal alien ran a small painting business and is the sole support of his family according to the media. Brenda Robles, the oldest DACA baby who is in her twenties, says that the family has been working for eight years to keep him from being deported.

Several years ago Robles was the victim of an armed robbery and cooperated with Lakewood police in the investigation. He applied for a U Visa which is granted for victims of crime which result in significant physical or emotional harm such as sexual assault, trafficking aliens, prostitution, and the like.  Robles was turned down.

Robles was only an hour away from deportation when he fled to Gethsemane Lutheran Church in downtown Seattle.  He addressed the congregation in Spanish because after 18 years in the U.S.,  he does not speak English.

The pastor of the sanctuary church says that the church is providing a refuge because we must love our neighbors. The question, however, is how many neighbors the congregation is willing to love. One? Ten? One hundred? One thousand?

Never mind that Seattle has a huge homeless population and Gethsemane Lutheran is not housing any of them. Invite the neighbors in but neglect ones own children. Is that what these Lutherans believe?