Christopher Caldwell on a New French Theory of Political Correctness 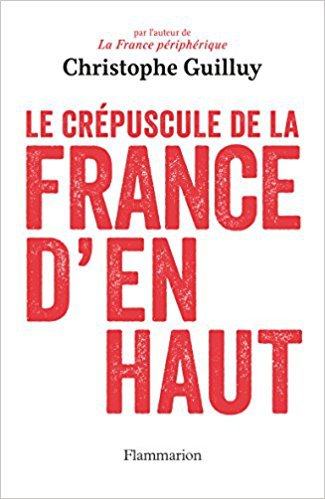 Ideologically, France remains the second or third most important country in the world after the U.S. and perhaps Britain because of, among other reasons, the lucidity of French prose, the fame of its history (for example, I could give you a rough outline off the top of my head of the history of France since Cardinal Richelieu became first minister almost 400 years ago; in contrast, I have virtually no idea what happened in Spain between the Peninsular War between France and England and the beginning of the short-lived Spanish Republic of 1931), and the tendency of theorists, French and foreigners such as Marx, to build models around its history.

With the first round of the French presidential election coming up on Sunday, here is a review in City Journal by Christopher Caldwell of a new book (in French) by French real estate theoretician Christophe Guilluy, The Twilight of the French Elite:

At the opening of his new book, Guilluy describes twenty-first-century France as “an ‘American’ society like any other, unequal and multicultural.” It’s a controversial premise—that inequality and racial diversity are linked as part of the same (American-type) system and that they progress or decline together. Though this premise has been confirmed in much of the West for half a century, the assertion will shock many Americans, conditioned to place “inequality” (bad) and “diversity” (good) at opposite poles of a Manichean moral order. …

At a practical level, considerations of economics and ethnicity are getting harder to disentangle. Guilluy has spent years in and out of buildings in northern Paris (his sisters live in public housing), and he is sensitive to the way this works in France.

The French, no fools, reserved their inner cities for what Whit Stillman’s characters call the High Urban Bourgeois. They built their worker public housing not in inner cities, but in the suburbs (which came as a revelation to Chicago’s second Mayor Daley when he started to vacation in Paris over a quarter century ago, and was inspired to beginning conspiring with Rahm Emanuel to demolish Cabrini Green and other urban housing projects).

But in recent decades, immigrants and their descendants, heavily Muslim, have been squeezing the indigenes out of the suburban housing projects.

A public-housing development is a community, yes, and one can wish that it be more diverse. But it is also an economic resource that, more and more, is getting fought over tribally. An ethnic Frenchman moving into a heavily North African housing project finds himself threatening a piece of property that members of “the community” think of as theirs. Guilluy speaks of a “battle of the eyes” fought in the lobbies of apartment buildings across France every day, in which one person or the other—the ethnic Frenchman or the immigrant’s son—will drop his gaze to the floor first.

Since provincial France is perhaps the best rural real estate in the world, getting squeezed out of big cities doesn’t sound so bad for indigenous working class. But as we’ve all found out over the last quarter of a century, in the Age of the Information Superhighway, you paradoxically need to work in a huge city to be somebody. Living in Nowheresville, even in Nowheresville, France is an invitation to get stepped on by urban elites.

Guilluy has tried to clarify French politics with an original theory of political correctness. The dominance of metropolitan elites has made it hard even to describe the most important conflicts in France, except in terms that conform to their way of viewing the world. In the last decade of the twentieth century, Western statesmen sang the praises of the free market. In our own time, they defend the “open society”—a wider concept that embraces not just the free market but also the welcoming and promotion of people of different races, religions, and sexualities. The result, in terms of policy, is a number of what Guilluy calls “top-down social movements.” …

French elites have convinced themselves that their social supremacy rests not on their economic might but on their common decency. Doing so allows them to “present the losers of globalization as embittered people who have problems with diversity,” says Guilluy. It’s not our privilege that the French deplorables resent, the elites claim; it’s the color of some of our employees’ skin. French elites have a thesaurus full of colorful vocabulary for those who resist the open society: repli (“reaction”), crispation identitaire (“ethnic tension”), and populisme (an accusation equivalent to fascism, which somehow does not require an equivalent level of proof). One need not say anything racist or hateful to be denounced as a member of “white, xenophobic France,” or even as a “fascist.” To express mere discontent with the political system is dangerous enough. It is to faire le jeu de (“play the game of”) the National Front. …

In France, political correctness is more than a ridiculous set of opinions; it’s also—and primarily—a tool of government coercion. Not only does it tilt any political discussion in favor of one set of arguments; it also gives the ruling class a doubt-expelling myth that provides a constant boost to morale and esprit de corps, much as class systems did in the days before democracy.

People tend to snicker when the question of political correctness is raised: its practitioners because no one wants to be thought politically correct; and its targets because no one wants to admit to being coerced. But it determines the current polarity in French politics. Where you stand depends largely on whether you believe that antiracism is a sincere response to a genuine upsurge of public hatred or an opportunistic posture for elites seeking to justify their rule.

I believe the Wall Street Journal has an opening in its columnist list since former Jerusalem Post editor Bret Stephens moved over to the New York Times to bring an apparently unique perspective not adequately conveyed by Roger Cohen, David Brooks, and/or Tom Friedman. Caldwell would be an ideal addition to the WSJ roster.