Here in the San Francisco Bay Area, visa mill “universities” have been a popular way for the criminal entrepreneur to make piles of money from gullible or nefarious foreigners looking to break in to the American economy. The rip-off consists of selling fake educations to colleges with sketchy or nonexistent accreditation to foreigners so they can acquire student visas to worm their way into the US. (See my 2011 examination of these immigrant-focused schemes: Visa Mills Scam Profitably in Silicon Valley.)

Another likely visa mill was Oakland’s Oikos University, the site of a mass shooting in 2012 where an unhappy immigrant murdered seven. The school offered studies to an F-1 visa clientele in bible studies, music and vocational nursing. 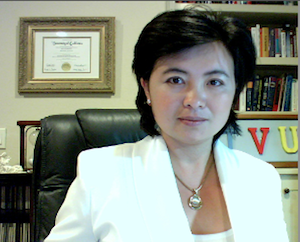 One of the more notorious visa mills has been Pleasanton’s Tri-Valley University. The President of TVU was a Chinese woman, Susan Xiao-Ping Su (pictured), who made over $5 million during her tenure, quite a trick when you consider the school was founded in 2008 and shut down by the authorities in 2011. Authorities may have figured out the school was a scam when students were “scattered across the country” in convenience store jobs and such (‘Sham’ University Case One of Biggest, Official Says, Pleasanton Patch, May 4, 2011).

For some diversity fun, you can see the sentencing story explained in a foreign language, perhaps Telegu, at this link, showing interest in TVU’s fate extends far beyond English-speaking California.

SAN FRANCISCO (AP) — A San Francisco Bay Area woman was sentenced to more than 16 years in prison for running what prosecutors said was a sham university that served as a front for an immigration scam.

Susan Xiao-Ping Su, founder and president of the phony Tri-Valley University in Pleasanton, was accused of charging hundreds of foreigners, mostly Indian nationals, tuition and other payments for visa-related documents that allowed them to live and work in the U.S. while she purported that they were here legally to study. She made more than $5.6 million and used the money to buy commercial real estate, a Mercedes Benz and multiple homes, including one at a golf club, federal prosecutors said Monday.

U.S. District Court Judge Jon S. Tigar sentenced Su, 44, on Friday after she was convicted in March of visa fraud and other charges. She was also ordered to forfeit $5.6 million and pay more than $900,000 in restitution to two companies that processed payments from students, authorities said. Su’s attorney, John Jordan, said he has filed a notice of appeal with the 9th U.S. Circuit Court of Appeals.

“Student visas are intended to give people from around the world a chance to come to this country to enrich themselves with the vast learning opportunities available here,” Tatum King, acting special agent in charge for Homeland Security Investigations, San Francisco, said in a statement. “But in this case, the defendant was interested in a different kind of enrichment, her own.”

Most of the students appeared to know they were taking part in a fraudulent scheme, said Mitchell Rose, a supervisory special agent with Homeland Security Investigations in San Francisco.

They received visa-related documents in exchange for about $2,700 a semester, Rose said.

Many of them left the country on their own after the school was raided in 2011, while others applied to regain their student status.

The Tri-Valley case is not unique in the Bay Area. Jerry Wang, the chief executive officer of Herguan University and the University of East-West Medicine in Sunnyvale, is also facing visa fraud charges in connection with what authorities say is a similar scheme. He has pleaded not guilty and is scheduled to go on trial next month.

In the Tri-Valley case, employees testified that the school had no graduation and admission requirements, and that Su, of Pleasanton, instructed her staff to fabricate transcripts and other documents. Some professors said Su used their names, though they did not teach at Tri-Valley or have any connection to the school.

Tri-Valley described itself as a “Christian higher education institution” that provided higher education in engineering, business and ministry, according to court documents. But Rose said investigators found purported classes were non-existent or had technical problems. Attendance at legitimate online classes was sparse, but the students obtained high grades nonetheless.