The Chinese are in for a new dark, time of Maoist self-flagellation, only this time it isn’t because one might discover he is a running dog of the capitalists.

Instead, they have to remonstrated with themselves over you know what: RACISM!

A detergent ad depicts a black fellow spattered with with white paint, flirting with an attractive Chinese girl at a laundromat. She tosses him into a washing machine, and he emerges as a Chinaman. 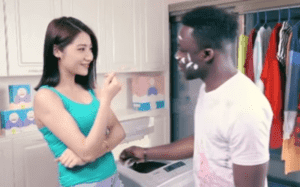 This, we are told by Those Who Know, is racist. Why a black man would appear in an obviously racist we are left to wonder.

Rest assured, “China’s Oprah Winfrey” is on the case, reminding her countryman that racism “is a deeply rooted evil within us.”

Oddly enough, the video stream at the link shows an ad for a detergent that turns a white man black. “Coloured is best,” it says.

One may assume this is not racist.