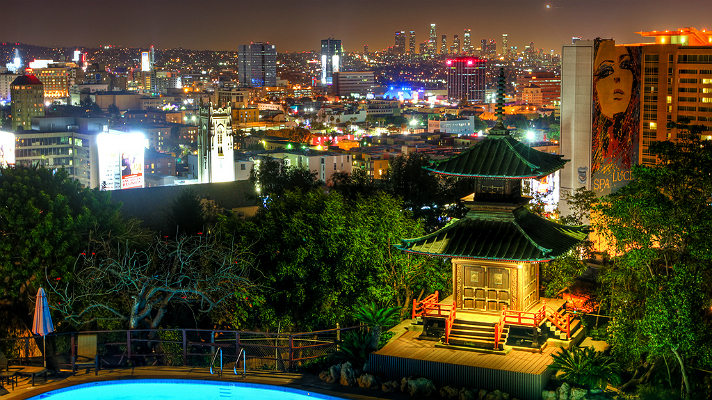 For a place with lots of hills, Los Angeles doesn’t have all that many restaurants with a view of Los Angeles. Fortunately, there’s Yamashiro, a fun old mock Japanese tourist restaurant with a great view of the lights of Hollywood. For a hundred years, people have been going to Yamashiro for a light-hearted night out.

But, now, these are Serious Times. From the Los Angeles Times:

Shyong? That doesn’t sound very Japanese to me. Are you sure you aren’t a Chinese person appropriating Japanese culture? Or did the Japanese appropriate the only true culture, China’s, so it’s all good?

The Reclining Buddha Roll arrived on a spare white plate, a chilled log of rice and shrimp sliced and stacked to approximate the lumpy outline of a Buddha on his back, each piece dotted with what appeared to be Sriracha sauce.

I looked at the waiter, feeling as though there were some joke I didn’t understand. Was this sushi? Was I in a Japanese restaurant, as I had assumed when I booked a reservation here for my girlfriend’s birthday dinner? Should I apologize to my girlfriend?

Yamashiro is a century-old Los Angeles landmark that once served as a social club for Hollywood’s early elites. It is an utterly unique piece of architecture that incorporates American materials with pieces lifted from ancient Japan and pan-Asian architectural flourishes.

Isn’t the Mandarin-speaking Mr. Shyong pretending to get upset on behalf of the Japanese also a dubious pan-Asian flourish?

It is also an inauthentic fantasy of Japanese culture that has generated profits exclusively for non-Japanese people, protected by a listing on the National Register of Historic Places while longtime businesses in Little Tokyo face displacement.

Outcries over cultural appropriation are a regular presence in our news feeds. Every industry seems to be debating how we should portray and profit from other cultures — a natural outcome in a world where social media allows people to give feedback in real time. Most recently, critics including the Los Angeles Times’ Justin Chang pointed out how Japanese culture and people seemed to be a silent, decorative backdrop in Wes Anderson’s new film “Isle of Dogs.”

Amid all this, I wondered: How should I feel about Yamashiro?

Eventually, a white guy explains to the reporter that Yamashiro’s inauthenticity makes it authentically part of Los Angeles’s time-honored culture of inauthenticity.