China’s Robot Revolution Hitting a Few Bumps along the Road

About a month ago, I wrote about an “all-robot” factory in Red China which was actually only 90 percent automated. Imagine the workers’ relief!

Still, the highly automated factory sent a strong message: Chinese elites intend to maximize automation in order to eliminate jobs and they don’t try to pretend otherwise to the human workers.

Which is odd, because a few years ago after the world economic downturn, leaders feared social chaos among the laid-off workers, like the unrest in 2008 where unhappy workers tore up a factory while yelling “It’s good to smash.” There are millions of internal migrants within China who travel far from their homes to work in dingy factories and constitute a potential army of revolutionaries against the state, in the minds of leaders. Mass unemployment is seen as possibly leading to social disruption which threatens Beijing. A 2009 New York Times story noted the unemployment of an “army of migrants” had “government leaders fretting about the country’s stability” (China Fears Tremors as Jobs Vanish From Coast).

But now, Red China is a world leader for transitioning from humans to machines in manufacturing, and is forecast to have the most robots in the world by 2017, which will certainly lead to massive unemployment. What’s the plan from the big brains in Beijing? 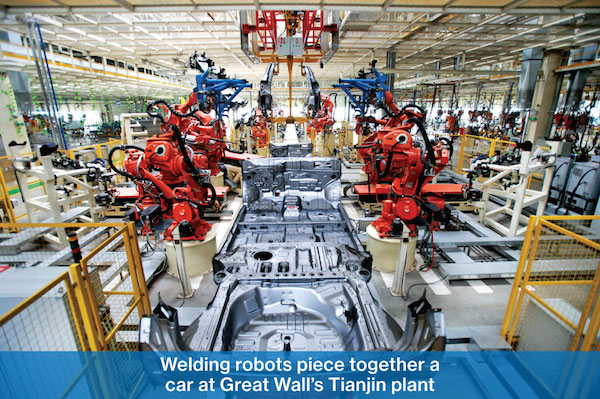 Martin Ford, author of “Rise of the Robots: Technology and the Threat of a Jobless Future” considered China’s move to the revolutionary machines in an opinion piece for the New York Times. China is indeed planning a major transition to smart machines, although the resulting technological unemployment is not much mentioned, perhaps because other issues are also pressing.

Unlike America, China doesn’t have the problem of an uncontrolled immigration system with no Off switch to stop the inflow of unneeded workers in the automated future when human workers are far less needed to produce goods and services.

OVER the last decade, China has become, in the eyes of much of the world, a job-eating monster, consuming entire industries with its seemingly limitless supply of low-wage workers. But the reality is that China is now shifting its appetite to robots, a transition that will have significant consequences for China’s economy — and the world’s.

In 2014, Chinese factories accounted for about a quarter of the global ranks of industrial robots — a 54 percent increase over 2013. According to the International Federation of Robotics, it will have more installed manufacturing robots than any other country by 2017.

Midea, a leading manufacturer of home appliances in the heavily industrialized province of Guangdong, plans to replace 6,000 workers in its residential air-conditioning division, about a fifth of the work force, with automation by the end of the year. Foxconn, which makes consumer electronics for Apple and other companies, plans to automate about 70 percent of factory work within three years, and already has a fully robotic factory in Chengdu.

Chinese factory jobs may thus be poised to evaporate at an even faster pace than has been the case in the United States and other developed countries. That may make it significantly more difficult for China to address one of its paramount economic challenges: the need to rebalance its economy so that domestic consumption plays a far more significant role than is currently the case.

China’s economic growth has been driven not just by manufacturing exports, but also by fixed investment in things like housing, factories and infrastructure — in fact, in recent years investment has made up nearly half of its gross domestic product. Meanwhile, domestic consumer spending represents only about a third of the economic pie, or roughly half the level in the United States.

This is clearly unsustainable. After all, there eventually has to be a return on all those investments. Factories have to produce goods that are profitably sold. Homes have to be occupied, and rent has to be paid. Generating those returns will require Chinese households to step up and play a larger role: They will have to spend far more, not just on the goods produced in China’s factories, but increasingly in the service sector.

Making that happen will be an extraordinary challenge. Indeed, the Chinese leadership has been talking about it for years, but virtually no progress has been made. One problem is that even in the wake of recent wage increases, average Chinese households simply have too little income relative to the size of the economy.

Another problem is that the Chinese public has an extraordinary propensity to save. By some estimates, the average household socks away as much as 40 percent of its income. That may be partly driven by the need to provide for retirement and self-insure against risks like unemployment and illness, as China’s newly capitalistic economy has largely decimated the social safety net.

The bottom line is that any policy designed to rebalance economic growth will have to raise household incomes while dampening down the saving rate. That would be a daunting challenge under any circumstances, but accelerating technology is virtually certain to make it far more difficult.

The traditional path followed by developed countries has been to first raise incomes and build a solid middle class on the basis of manufacturing, and then later to make the transition to a service economy. The United States, and later, countries like Japan and South Korea, had the luxury of undertaking that journey at a time when technology was far less advanced. China is faced with making a similar transition in the robotic age.

Automation has already had a substantial impact on Chinese factory employment: Between 1995 and 2002 about 16 million factory jobs disappeared, roughly 15 percent of total Chinese manufacturing employment. This trend is poised to accelerate.

That might not be a problem if the Chinese economy were generating plenty of higher-skill jobs for more educated workers. The solution, then, would simply be to offer more training and education to displaced blue-collar workers.

The reality, however, is that China has struggled to create enough white-collar jobs for its soaring population of college graduates. In mid-2013, the Chinese government revealed that only about half of the country’s current crop of college graduates had been able to find jobs, while more than 20 percent of the previous year’s graduates remained unemployed.

According to one analysis, fully 43 percent of Chinese workers already consider themselves to be overeducated for their current positions. As software automation and artificial intelligence increasingly affect knowledge-based occupations, especially at the entry level, it may well become even more difficult for the Chinese economy to absorb workers who seek to climb the skills ladder.

What policies might help China succeed in making the transition to a consumer economy even as the robotic revolution unfolds? Strengthening the health care, retirement and unemployment insurance systems, so that workers feel more secure, might help lower the savings rate somewhat.

However, it seems likely that the Chinese government will ultimately need to resort to direct income supplementation in some form — perhaps through a program similar to the earned-income tax credit in the United States. Even that may prove ineffective in the long run as rapidly advancing technology leaves more and more workers behind.

China could well turn out to be ground zero for the economic and social disruption brought on by the rise of the robots. The country’s relatively brittle authoritarian political system, together with its dependence on a sustained level of economic growth that would be considered extraordinary in any developed nation, suggest that China may face a staggering challenge as it attempts to adapt to the realities of a new age.

Martin Ford is the author of “Rise of the Robots: Technology and the Threat of a Jobless Future.”