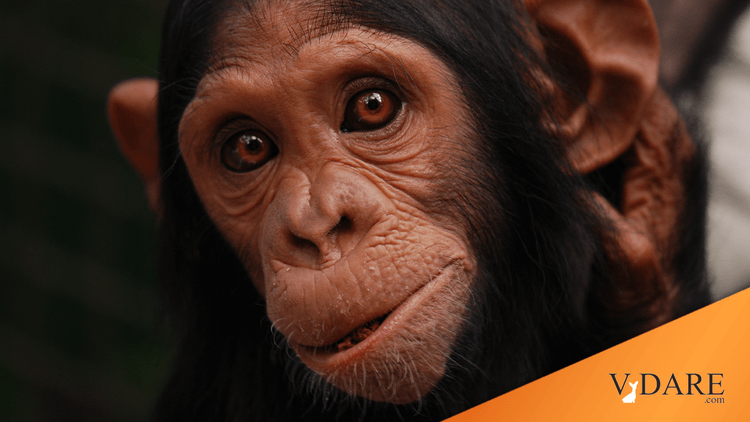 From a Nova documentary Ape Genius on why chimpanzees don’t seem to learn much as a species:

REBECCA SAXE: It’s a special cognitive achievement. For some reason kids do this naturally, almost immediately. And curiously, apes can’t get into that.

NARRATOR: The triangle is the core skill that makes teaching possible. Humans have it; apes seem to lack it. But apes are also missing one more thing. It’s a key emotional driver: the passion to cheer each other on.

TETSURO MATSUZAWA: “Good,” “good job,” “well done.” This kind of facilitation, giving a hand, encouragement, is the base of teaching.

REBECCA SAXE: It seems like it’s not just a cognitive capacity that’s necessary for teaching. There’s this other thing, which is wanting to teach, that seems to be really pervasive in humans and maybe mysteriously missing in apes.

NARRATOR: The pieces are now coming together. Apes have culture, a rare achievement in the animal world. They can learn from each other by imitation. But this process is passive, often slow and can easily backslide.

BRIAN HARE: Probably there’s a lot of slippage. There’s a lot of loss of cultural innovations between generations when you’re talking about a chimpanzee.

MICHAEL TOMASELLO: If an ape invents something new and important and interesting, maybe some others will learn it, maybe they won’t.

NARRATOR: Unique among animals, humans have both the passion and mental skill to teach each other. When you’re a student rather than a spectator, learning jumps to warp speed. That’s because teaching locks in progress.

(Also, it has the usual chimpanzee guru Sue Savage-Rumbaugh in it, which always sounds like a name made up for an ape expert by Hunter S. Thompson.)