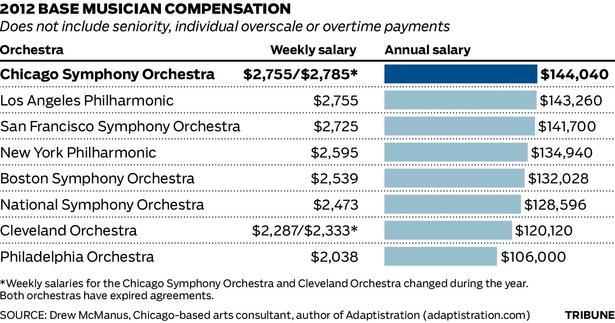 The Chicago Symphony Orchestra, traditionally the highest paid orchestra in America (current minimum salary $144,000), has gone out on strike. As president of the Chicago musicians union, my late father-in-law helped lead the CSO's last strike back in 1991, which reminds me of a paradox of labor economics that few Americans grasp anymore: unions are best able to serve the highest-skilled workers 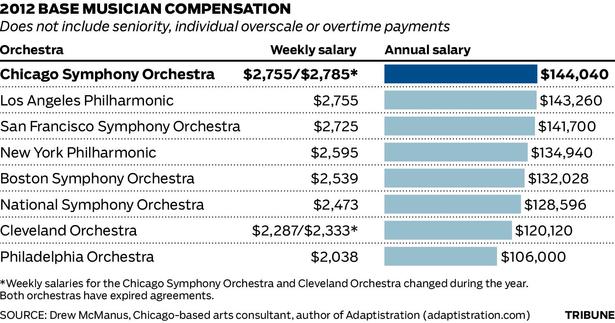 Back in 1991, the night that was supposed to mark Daniel Barenboim's debut as conductor of the CSO saw the Sailer Family marching in a picket line in front of Symphony Hall on Michigan Avenue, with my father-in-law carrying my toddler son, which made for some good local news footage. Later, Barenboim came over to the union hall to introduce himself to the strikers, whom he was going to be leading when the strike was over.

My most vivid memory of my one night on the frontlines of the labor movement is that I’m not really cut out for class warfare, as I discovered when I shook hands with Barenboim. I had previously met plenty of CEOs, university presidents, Hollywood celebrities and other imposing personages, but major league conductors like Barenboim are in a class by themselves for superb attire, grooming, and gesture. I wanted to ask Barenboim how much his suit cost, but I realized that would be a faux pas. I suddenly felt terrible guilty that my father-in-law was depriving wealthy season ticketholders of the pleasure of basking Maestro Barenboim’s radiance.

But my wife’s dad, who played the most blue-collar of classical instruments, the tuba, was made of tougher stuff. He kept the orchestra out for eleven concerts, then signed a satisfactory deal.

Of course, Chicago Symphony Orchestra musicians are not exactly strawberry pickers, with their minimum salary of $144,000. Why do they need to go on strike?

I’ve noticed that the public find the news of strikes extremely agitating. I only went to hear the CSO play once in the 18 years I lived in Chicago, but as soon as I read that the CSO was out on strike, I felt a sudden urge to fly from L.A. to Chicago to hear them play, which the strike was, obviously, stopping me from doing. It’s a lot like when CalTrans announces a new Carmaggedon shutting down the 405 freeway in Sepulveda Pass. I instantly get the urge to drive to the Santa Monica Beach the night of the impasse to see if, uh, the grunion are running. Granted, I’ve never gone to a grunion run in my entire life, but if you tell me I can’t, I sure want to go. The same is true with strikes. When the Chicago teachers went out on strike I felt like flying to Chicago and enrolling my sons in public school there.

But the simple answer is that the richest musicians go on strike because they are the best and thus the hardest to replace. Without severe government favoritism, unions end up being guilds for NBA players and similar superstars. My father-in-laws strategy was to emphasize the CSO and the Lyric Opera, then hold on the line on insisting that Broadway touring companies and ballets coming to Chicago have live orchestra. The night club bands and the wedding bands would more or less have to shift for themselves. There is a big pyramid of talent out there, with the CSO at the top. Where would management get strikebreakers.

PS: I see the new strike appears to have been settled after a day