Justice is supposed to be swift, but it usually isn’t in the real world. These days, years normally pass between the commission of a crime and the trial of the accused. In the passing years, families have tried to return to some sort of normalcy after the loss of a loved one, only to have the scab ripped off when the events are cruelly recounted in the courtroom. That scenario is happening now in Los Angeles in the trial of a shocking murder. 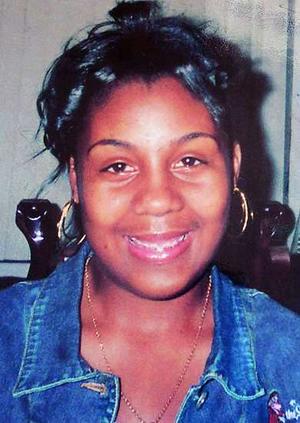 Fourteen-year-old Cheryl Green (pictured) was shot and killed December 16, 2006, near her home in LA. The crime appears to be one of the many murders committed by Hispanic gang members against random black citizens in a program of ethnic cleansing in the city. The trial of Cheryl Green’s accused killer has just begun.

One moment, it was an idyllic December afternoon with a group of young people hanging out in the driveway, one young man showing his 6-year-old cousin how to play Tetris on a cellphone.

In the next, a gunman walked up and began firing into the crowd, sending people screaming and running, leaving a 14-year-old girl dead and others injured.

What led to the 2006 death of Cheryl Green was not a calculated crime but an indiscriminate racial hatred that has long plagued a narrow strip of Los Angeles squeezed between Torrance and Carson, known as the Harbor Gateway area, a prosecutor said Wednesday.

In opening statements in the trial of two Latino gang members charged in the murders of Cheryl Green and a potential witness, prosecutors described the racially charged environment of the Harbor Gateway area that led to the girl’s death. The slaying sparked outrage and highlighted long-standing black-Latino tensions in the neighborhood.

It was a world in which intimidating and killing blacks was a ”full-time enterprise” for powerful Latino gangs, and walls covered in graffiti with racial epithets made it abundantly clear that blacks were not welcome in the area, Deputy Dist. Atty. Gretchen Ford told jurors.

Jonathan Fajardo, now 22, faces the death penalty if convicted of Green’s murder. Fajardo and a second defendant, Daniel Aguilar, 23, are also accused in the stabbing death of a potential witness, a fellow gang member whom they suspected of talking to the police shortly after the shooting. Aguilar is not charged in Green’s killing.

Ford said the chain of events began with a black man driving up in an SUV to a market in the area that members of the 204th Street gang frequented. When Fajardo and others approached the car, the man flashed a gun, and the gang members, who were unarmed, fled. […]

Green’s mother, Charlene Lovett, sat in the audience with other family members and sobbed upon hearing the scene of her daughter’s death described.

”It’s something that a mother should never have to envision in their mind, their child getting killed,” she later said outside court. ”It’s horrible.”