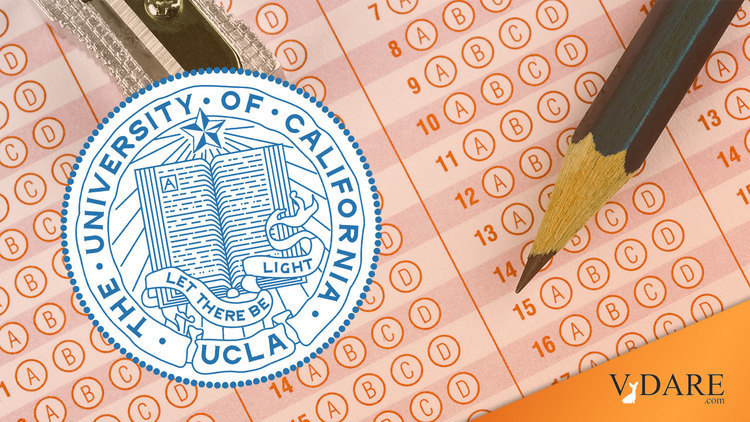 Let's be clear that he wants to get rid of the SAT I (the traditional aptitude test) in favor of the SAT II (the optional subject achievement tests):

I know how counterintuitive this sounds (I am presenting a conclusion I resisted as long as I could). But the truth about any achievement test, from an AP exam down to a weekly pop quiz, is that the smartest kids tend to get the highest scores. All mental tests are g-loaded to some degree. What was not realized until the UC study was just how high that correlation was for the SAT and the achievement tests.

Before, studies of the relationship had been based on self-selected samples of students who chose to take achievement tests along with the SAT, and there was good reason to think those students were unrepresentative. But by requiring all applicants to take both the SAT and achievement tests, the University of California got rid of this problem—and the correlations were still very high.

After the College Board did all of its statistical corrections in its 2002 study and applied them to test-takers from California, it found, for example, that the correlation between the SAT Verbal and the Literature Achievement test was a very high 0.83 (a correlation of 1.0 represents a perfect direct relationship). The correlation between the SAT Math and the Math IC achievement test was 0.86. So I conclude that bright students who do not go to first-rate high schools will do fine without the SAT.

So, it's a six of one (SAT I), half dozen of another (SAT II) result. Murray recommends:

Suppose, for example, that this fall Harvard and Stanford were jointly to announce that SAT scores will no longer be accepted. Instead, all applicants to Harvard and Stanford will be required to take four of the College Board's achievement tests, including a math test and excluding any test for a language used at home. [More]

The University of California system started requiring three SAT II achievement tests in order to give Hispanics a leg up after Proposition 209 abolished ethnic preferences in California. Latino kids tend do unsurprisingly well on the Spanish achievement test. Blacks, however, tend to do terribly on Spanish. (Black lack of interest in learning Spanish is quite striking: a top black attorney in LA who used to work for Johnnie Cochran and now makes a nice living both suing the LAPD and defending LAPD officers told me in 2001 that of the 900 black LAPD cops, only four spoke Spanish.) But, blacks are losing political power in California, so hurting blacks to help Latinos was a no-brainer for the University of California.

I suspect that learning a language is the easiest educational skill to simply buy for your kids. If you send your kid (at a young enough age) to Seville for a few summers of Spanish immersion, he'll come back speaking Spanish. In contrast, if you send him to Cambridge to trod the ground where Isaac Newton worked out the calculus, he won't just pick up calculus through immersion in the milieu. So, I'd modify Murray's suggestion to ban foreign language test scores altogether.