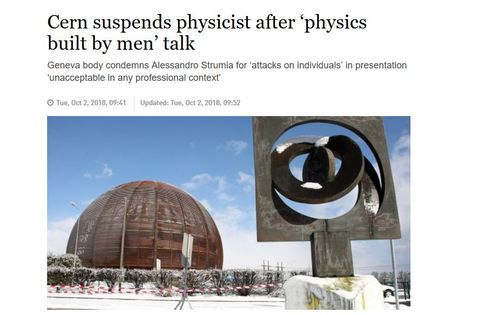 In Friday's Radio Derb I covered the fuss at CERN, the huge high-energy physics lab in Geneva, Switzerland.  CERN is running a series of "Workshops on High Energy Theory and Gender," don't ask me why.

At the first of these workshops, on September 28th, Radio Derb reported that:

An Italian physicist, name of Alessandro Strumia, contributed a talk arguing, with charts, graphs, and tables, that the under-representation of women in advanced physics is not due to discrimination by men. Outrage ensued, and CERN has suspended Prof. Strumia.

Did I mention that CERN is headed by a woman, particle physicist Fabiola Gianotti, also Italian? This week Dr Gianotti unsheathed her claws against Prof. Strumia with a long screeching tirade on a website called www.particlesforjustice.org, which she seems to have created just for this purpose.

I did Dr Gianotti an injustice there. A listener who knows CERN pointed out that Dr Gianotti is not listed among the signatories to that tirade. When I asked whether she had dissociated herself from it, my listener clarified thus:

The statement is most certainly not an official statement by CERN, and none of the authors and only a single one of the signatories give CERN as their affiliation! In addition, its says explicitly: All authors and signatories represent themselves and not their institutions. So I do not see why Fabiola Gianotti should explicitely dissociate herself from the statement. If she had signed, it could have been interpreted as being CERN’s official line, so she has wisely refrained from doing this. In view of the list of authors, I strongly suspect that the initiative cam from US institutions, so I find it unfair to blame CERN or the Director General.

I am grateful for the clarification and tender a grudging apology to Dr Gianotti.  Grudging, because CERN did suspend Prof. Strumia and is still running those damn fool "workshops."

Kingley Amis observed forty years ago that any event with "workshop" in its name is a power play by far-left agitators and a waste of normal people's time.