What a surprise: the Census projected Hispanic growth at less than it turned out, as has often been the case of the Census dealing with immigration effects in general.

When the 2000 Census was released, the actual population (281,421,906) was around six million more than the Bureau had guessed for its domestic counter. (Which today puts the number at over 310 million residents of the United States, with one net immigrant added every 45 seconds.) Demographers were "stunned" by the rapid population growth over the 1990s.

The 2010 state hispanic comparison is not yet complete, with 33 states analyzed up to this point. But most states had more Hispanics than the Census thought. 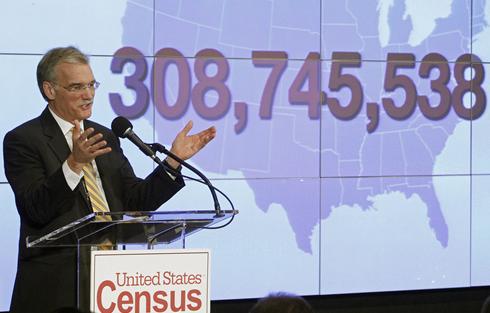 Hispanic growth in United States ahead of estimates, CNN, March 15, 2011

The growth of the Hispanic population in the United States is outstripping pre-census estimates, the Pew Hispanic Center report released Tuesday says

"The number of Hispanics counted in the 2010 Census has been larger than expected in most states for which the Census Bureau has released detailed population totals so far," the report says.

The Census Bureau has released its tally of Hispanics in 33 states.

"Those states' combined Census 2010 total of 38.7 million Hispanics was higher by 590,000 people," the report says. Data on the remaining states will be released by the end of March.

Last month, a Pew Hispanic Center report said a two-year decline in the unauthorized immigrant population in the United States had leveled off.

A rebounding economy may be a counteracting force, one of the study's authors, Jeffrey S. Passel, said.

"What we've seen historically is that when employment opportunities have increased, we've seen increased flows" to the United States, he said.

The economy in 2009 was better than in 2008, and indications are that the numbers will be even better for 2010, hinting that illegal immigration numbers could potentially creep back up, he said.