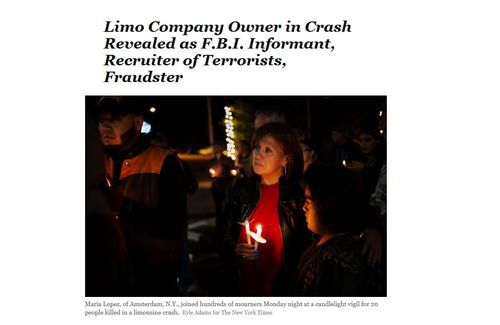 The National Transportation Safety Board will examine federal oversight of the limousine industry as part of its investigation into a deadly New York state crash that killed 20 people in the worst U.S. transportation event since 2009, Chairman Robert Sumwalt said.

“We certainly want to look at the regulation of limos. The Federal Motor Carrier Safety Administration does oversee motor carriers so we want to see if the regulation for limousines is adequate,” Sumwalt said Monday in an interview with CNN. “This does need to be a wake-up call.”

Originally, the Federal Aviation Administration was supposed to investigate airline crashes, but it was also supposed to promote the air travel industry. So the FAA crash investigations tended to bring back conclusions like “Pilot error: lack of The Right Stuff” or “Just one of those things, you know, whaddaya whaddaya?” As a post-Watergate reform, the NTSB was set up as in independent agency in 1975.

This limo crash is one of the more lethal transportation disasters in the U.S. in recent years. It’s not August 1985 anymore when the NTSB was real busy trying to figure out why all those airliners kept falling out of the sky. In part because of the NTSB, airliners don’t crash all that much anymore, so 20 people dying in a limo crash is, relatively speaking, a big deal today.

… He testified in the 2009 terrorism trial that in Pakistan, he had been active in an opposition political party, arrested and tortured and charged with murder in the 1990s, freed after his father bribed the police, had fled to Moscow, Mexico and finally Texas on a fake passport and was granted asylum in Albany.

For years I’ve been arguing we should have an independent National Immigration Safety Board that would look into particularly flagrant examples of disastrous immigrants and issue reports on what kind of legislative or regulatory reforms are needed to lessen the chances of similar fiascos in the future. Most of the existing agencies that could investigate these kind of cases, such as the FBI, which, for example, paid Hussain $96,000 to talk some petty criminals into a terror plot, are frequently compromised.

So how about we start with Shahed Hussain? For example, the decision to grant him asylum on the grounds that the government of Pakistan must be conspiring to pin a murder rap on poor innocent Shahed. That was all legit, right? Or maybe he really did murder somebody back in Pakistan? Or was it all just some BS he made up to move to America?

Q. “Welcome to JFK. What is the purpose of your visit to America, Mr. Hussain?”

A. “My friend, I hear USA is good place to hole up from law, yes? I am — how do you say? — on lam from murder charge back home. But not me! Not Shahed Hussain! Was … uh … Hussain Shahed who did it. Just bad paperwork. But police tell my father I no can come back until he finish paying rest of bribe.”

Q. “Why is your passport printed in the Cyrillic alphabet?”

A. “That Dmitry, he big stupid. I pay him 300 rubles for good American passport! How about this Social Security card I buy in Mexico?”

Can we at least find out what the truth is? Is that too much to asked about this Wretched Refuse?