"Can a Dress Shirt be Racist?"

Can a Dress Shirt Be Racist?

A startup finds that asking for certain data improves the fit of its clothes — and lands the company in a cultural minefield.

In 2008, an entrepreneur named Seph Skerritt was frustrated with the way he shopped for clothes. Then a student at MIT’s Sloan School of Management, he chafed at the time wasted while trying on garments in stores. Often, he thought, you settled on an ill-fitting item just to get the drudgery over with.

While on an internship in Asia, Skerritt had encountered the effortless magic of having a tailor custom-fit your shirt. Why not improve on that concept, he wondered, with an online service that fitted your shirts by asking you questions, and then mailed you the garments?

He christened his company Proper Cloth. Naysayers told him that when customers input their measurements, they often made mistakes — the idea wouldn’t scale. But Skerritt thought that guessing, even if one’s guesses were occasionally off, was still preferable to the chaos and disappointment experienced in a physical store.

So he set about developing an algorithm that could customize your shirt without needing a tape measure. …

He noticed an odd pattern. In that first batch of 30, the shirts fit best on testers who were Caucasians. They seemed to fit worse, in a predictable way, on people who weren’t Caucasian. All subjects of one ancestry — Asian, say — seemed to require the same general alterations. Skerritt noted the anomaly and added a question on what he called “ethnicity”: Asian, Black, Caucasian, Hispanic, or “I’m not sure.” The question, Skerritt says, has proven invaluable to sizing his customers’ shirts.

There’s no denying the satisfaction of a smartly tailored shirt. But with this one question, the once mundane world of dress shirts is now dabbling in a kind of racial profiling. Are we ready to dredge up centuries of racial strife, simply for a perfect fit?

I bet you have two warring opinions of this web site’s “ethnicity” question. One is that we humans have a long history of buying clothes without explicitly considering our ancestry, so this innovation sounds, if not racist, at least racially inappropriate. The other is that, well, maybe our body types do differ by race — and just accepting this reality frees us from having to wrestle with the Caucasian body proportions that dominate most clothing design.

So here’s my question: With the “ethnicity” question, is this entrepreneur courageously addressing the proposition that we’re different according to our ancestry, and propelling us toward a post-racial future? Or is he pretending to be scientific as a marketing gimmick, while actually enforcing false, outdated and possibly dangerous ideas about race?

If these ideas are false, why do they work?

But from the moment he heard about the shoes, Alan Goodman, a biological anthropologist at Hampshire College in Amherst, Mass., suspected that Nike’s science was weak. …

When I asked about Proper Cloth’s “ethnicity” question, Goodman had this to say: “Calling groups white or black is a pre-Darwinian view of biology that does not fit the facts of human variation.” Other anthropologists I spoke to also roundly denounced the question. Race, they say, is a social construct.

“[Race] doesn’t exist biologically, but it does exist socially… Culturally I’m white-ified. People see me as white. That has something to do with how I look, but it has nothing to do with biological variation.”

Here’s what they mean: if you were to travel across the Eurasian continent from Portugal to Japan, say, there would be no river, forest or discrete boundary where people suddenly started looking “Asian” (or “European” if you traveled from east to west). Instead, changes in physical appearance would occur so gradually and imperceptibly that you probably wouldn’t notice. You’d only be aware that, once in Japan, people definitely looked different than in Portugal.

The assertion is that the traits we associate with “race” — hair color and texture, skin pigmentation, epicanthic eye folds and whatever else — actually occur in gradients throughout the human family, not clean breaks. So much variation occurs within what we call “races” that to ascribe any particular traits to a certain race is, anthropologists say, misguided. 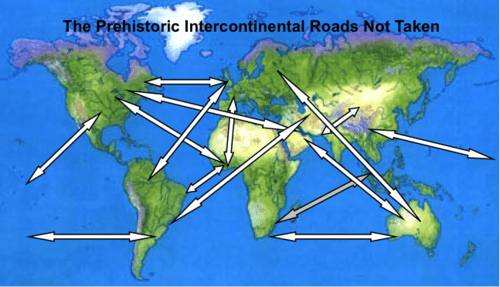 Dr. Goodman’s example of walking from Portugal to Japan is misleading for several reasons.

First, before 1492, many other transcontinental walks couldn’t be done at all because oceans got in the way. For example, it’s only 1600 miles from West Africa to Brazil, much closer than Portugal and Japan. But before 1492, the only way to get there was to travel all the way around the world the opposite direction, crossing, presumably, the Bering Straits. So, gene flow from West Africa to Brazil and vice-versa had been extraordinarily minimal for tens of thousands of years.

The above map that I created in 2005 lists 14 potential ways that continental-scale races could have mixed before 1492 but almost never actually did. For example, Australian Aborigines and South American Indians might have mated due to, say, shipwreck survivors floating all the way across the Pacific. But there’s not much evidence this ever happened. Europeans and North American natives conceivably might have interbred in Vinland or Greenland, but there’s not much evidence in genomic studies of this having noticeable impact.

We do know that prehistoric East Asians made it all the way to Madagascar off the coast of East Africa, where they left a substantial genetic imprint, and perhaps left some minor genetic imprint on the mainland of Africa. But, in general, outside of Madagascar, sub-Saharan Africans and East Asians were quite distinct in 1492.

Other routes on my map are ones that did exist pre-1492, such as over the Himalayas from South Asia to East Asia, but were difficult enough to restrain the scale of intermarriage.

Second, if you actually did walk from Portugal to Japan, you’d observe several breaks so that it would hardly be a smooth gradient of change. For example, a route through Nepal and Tibet would lead you through a sharp racial divide in the foothills of the Himalayas at about a mile elevation, the dividing line for the danger of malaria. Above that elevation tend to be East Asians, such as the Sherpas, who are better adapted to high elevations and don’t like venturing into the malarial lowlands. Below that elevation tend to be people with broadly Caucasian features.

Third, a more northerly route would lead you through areas of a certain level of gradient, such as the Eurasian steppe, but the population isn’t dense compared to Europe and East Asia.

Fourth, the United States is largely populated by peoples from the opposite ends of the world — e.g., Western Europeans, Eastern Asians, West Africans, and so forth — rather than by Uighurs and Hazaras from Central Asia. A better criticism of the now-dominant American view of race is that more subtle Old World racial distinctions are increasingly lost as everybody else bows down to America’s rather crude black-white-red-yellow ancestral mindset.

Before we slam down the gavel on Proper Cloth, though, a quick story: I’m lanky, with long arms, long legs and a decidedly short torso. I can be the same height as someone standing but when I sit, they tower over me.

Some years back, I found myself in Seoul, South Korea, perusing dress jackets in a department store. As I tried them on, I discovered that all the sleeves were several inches too short for my lanky arms. I am not (to my knowledge) Asian. Apparently, in Seoul, my body type was an extreme outlier.

So let’s look at the situation as Proper Cloth might: If that Korean department store had had a “western” section full of jackets sized more like those I might find in New York City, would that really be so bad?

When I related the tale to Goodman and asked if what I’d perceived was real — that I had an unusual body for Seoul — he said, “Yeah, that’s real, man. But Koreans are not a race. And you’re not a race. You’re an individual variant who happens to have long arms.”

Read the whole thing there. Lots more of interest …