California Water Shortage Now "Critical"—What Could Be The Reason? 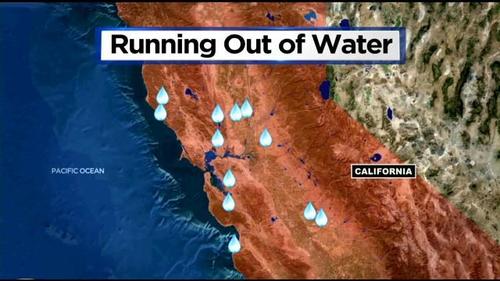 As America continues its (deliberate, government-driven) transformation from a First World superpower into a Third World basketcase, certain things that Americans used to take for granted will suddenly become unstable or unavailable.  One of these things is a reliable source of water.  This tends to happen when you import an unlimited number of people into an area without making improvements to the infrastructure.

California’s water shortage has reached a critical stage.  At least a dozen communities in Northern and Central California are at risk of running out of water in just 60 days.

One particularly poignant observation comes from one of the new residents of California our government has gone through so much trouble to import.

A few blocks away, Maria Dominguez, a 28-year-old mother of two, pulled over to question a stranger she saw standing near the town’s faltering well. “What can you tell me about my water?” she hollered. “I don’t know how much more of this I can take.”

Since the middle of summer, she’s been filling buckets with a friend a town over, then leaving them outside to warm in the sun. It’s the only way her mother, a picker, can sluice the field dust off before kissing her grandkids goodnight.

“It’s feels like we’re back in Tijuana,” said Dominguez, who came with her family when she was a little girl. “This is how they do it in Mexico.” She was on the way home with boxes of food and water, sixty pounds of drought disaster relief, paid for by the state and pulled off the back of flatbed truck.

[Not One Drop: How Long Will California Survive Life Without Water? by Tony Dokoupil, NBC, September 12, 2014]

"This is how they do it in Mexico."  Get ready to hear those words cover a greater and greater portion of what used to be called the American Way of Life.

Unless of course, we win.  (With your help.)