Its hard to be positive about the future of California. The state is run entirely by Democrats who have made very bad decisions about resources in the past and continue to now. The have pursued diverse growth at any cost despite claiming concern about the environment. The Dems have ignored the Medieval mega-droughts that occurred in California from 900 to 1400 AD, pretending that water would be available forever when recent climate history shows otherwise.

Governor Jerry Brown has dawdled, hoping to get lucky with rain, while the drought has reached a crisis point where last month a NASA water scientist warned there was only a year of water left. While Brown now bemoans climate change as not a hoax and is the cause of the drought, just last August he told all of Mexico (population nearly 125 million) that they were all welcome to come live in sanctuary state California.

Below, the vital snowpack is practically non-existent while reservoirs are low, particularly in the south. 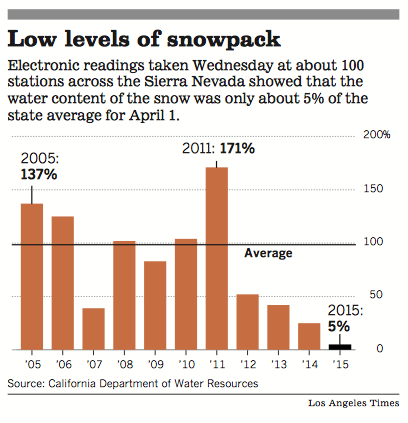 A San Francisco TV station reported on the situation of Porterville in the central valley, where wells have been dry for two years and water is trucked in weekly. At the end, it remarks, this could be the stark future for Californias 38 million residents. But how will that work if water has to come by truck for hundreds of miles for millions of residents? Is that Plan B if the drought continues for years or decades?

Brown still isnt serious. Eighty percent of state water goes to agriculture but farmers arent required to cut back, even though agriculture is only two percent of the states economy.

History tells us that drought is a civilization killer, while Californias governor is dinking around with half-hearted conservation measures.

SACRAMENTO (CBS/AP) — Gov. Jerry Brown on Sunday defended his order requiring Californians statewide to cut back on their water use in a historic mandate that spares those who consume the most — farmers.

As California endures a fourth year of drought, Brown’s order this week requires towns and cities statewide to draw down water use by 25 percent compared with 2013 levels. While past reductions were voluntary, Brown said he is using his emergency powers to make the cuts mandatory.

Martha Raddatz, host of ABC’s “This Week” public affairs program, asked Brown why the order doesn’t extend to California farmers, who consume 80 percent of the state’s water supply but make up less than 2 percent of the state’s economy. Brown said farmers aren’t using water frivolously on their lawns or taking long showers.

“They’re providing most of the fruits and vegetables of America to a significant part of the world,” he said.

Brown said that before the cutbacks, some California farmers had already been denied irrigation water from federal surface supplies, forcing them to leave hundreds of thousands of acres unplanted. Many vulnerable farm laborers are without work, he said. Farmers who don’t have access to surface water have increased the amount of water pumped from limited groundwater supplies.

Brown announced the mandate on April 1 standing in the Sierra Nevada, where the snowpack measures at 5 percent of historical average, the lowest in 65 years of record-keeping.

Addressing agriculture, Brown said on the broadcast that farmers asserting century-old water rights deeply rooted in state law that allows them access to more water than others “are probably going to be examined.”

After declaring a drought emergency in January 2014, Brown urged Californians to voluntarily cut their water use by 20 percent from the previous year. That resulted in great variations among communities and an overall reduction of about 10 percent statewide. Brown did the same as governor in 1977, during another severe drought, asking for a voluntary reduction of 25 percent.

The mandatory order will also require campuses, golf courses, cemeteries and other large landscapes to curb their water use.

“It is a wakeup call,” Brown said. “It’s requiring action and changes in behavior from the Oregon border all the way to the Mexican border. It affects lawns. It affects people’s — how long they stay in the shower, how businesses use water.”