It’s not news that California residents are escaping the worsened crime, traffic, housing prices and general crowdiness, but a landlord bringing his tenants along to a new state gets attention.

The unusual circumstance made the front page of the San Jose Mercury News on Friday: 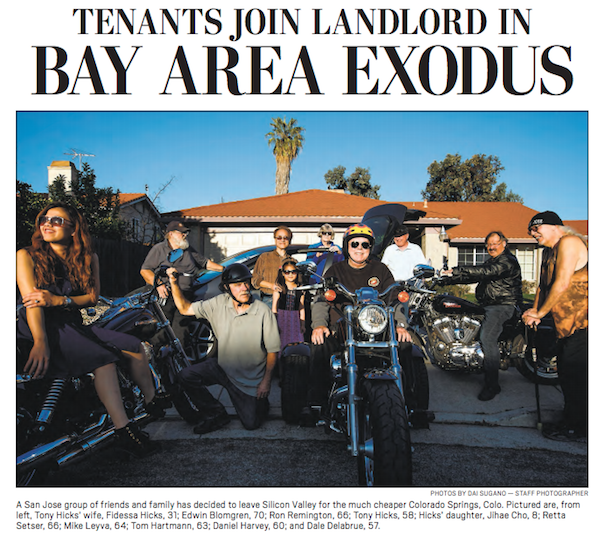 A few decades back, San Jose was a rather ordinary city, to be kind, and certainly not unaffordable. But now California has upward to nearly 40 million residents because of population growth mostly on the leftward coastal edge. And according to 2015 estimates, 27 percent of state residents (10.7 million) are foreign born. So as immigrants move in, Americans move out.

All this diversity does not come cheap: the cost of living has shot up. Housing in particular has gone stratospheric.

The KTVU report also headlined the diminished safety along with the dollar cost of California living:

SAN JOSE, Calif. (KTVU) – In the heart of Silicon Valley, the high price of real estate, coupled with a perceived low quality of life, are pushing some residents to move elsewhere. One landlord, after taking inventory of everything – from cost of living to earthquake probability to quality of life and new state laws – has decided now is the time to leave for greener pastures, and he’s taking his tenants with him.

“I’m looking for a more peaceful life. I don’t feel like I’m getting that here anymore,” said Tony Hicks as he stood outside his home that just sold for seven figures.

Hicks says the disappointment he feels with the State of California is leading him elsewhere. An engineer who went into real estate 30 years ago as a way to supplement retirement, he’s now in final preparations to sell all three of his South San Jose homes.

“The cost of living, and that fact that we don’t feel safe anymore,” said Hicks.

When he says “we,” he isn’t just referring to his wife and two daughters. Hicks, headed to Colorado, offered the same rental deal for his 10 tenants – people who share a deep religious faith, and whom he refers to as his friends and family.

“I can’t afford to live here otherwise. One he leaves, I can’t afford the rent here anymore,” said Edwin Blomgren, who’s been renting from Hicks since 2010, and has never seen a rent increase.

A retired navel petty officer, Blomgren is like many “friends” living in the three rental properties.. They are older, on fixed incomes, some have served in the military, and all see the financial writing on the now bare walls..

“San Jose is just too expensive for people like us. Not everybody works for a high-tech firm,” said Retta McDaniel Setser, another renter.