Water supply in California is such a serious issue that even journalists report on it.

Of course, scribblers describe the problem in terms of supply only (rainfall, reservoir levels and snowpack), never the growing demand (immigration-fueled population growth). 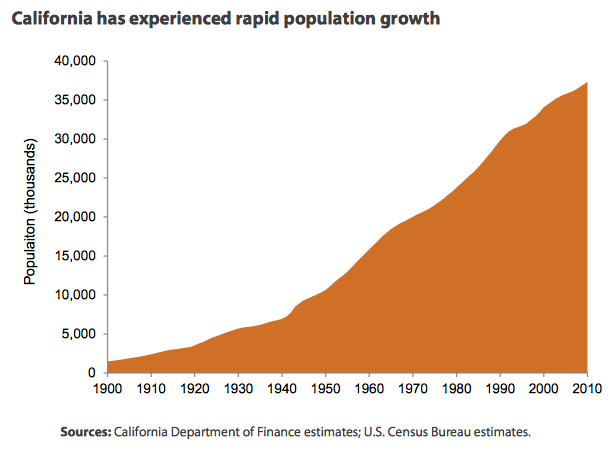 In recent decades, following a bad state-wide drought in the mid 1970s, Los Angeles installed millions of water-conserving toilets and shower heads, with excellent results. However, conservation can only go so far when endless population growth is the government’s policy.

Another dry year could be bad news for California, Los Angeles Times, October 14, 2013

[. . .] The widespread use of low-flow indoor fixtures helped drive down per capita water use in Southern California in recent decades. The region uses about the same amount of water it did 20 years ago, despite population growth.

Overall, Los Angeles uses less water than it did four decades ago, even though it has added more than 1 million residents during that time. Per person water use in Los Angeles is 123 gallons a day, compared to 187 gallons in the mid 1980s.

Seasonal predictions of rainfall are still unreliable, but the consensus of science prognosticators is not hopeful for overpopulated California.

Dry conditions are likely to persist this winter across the Southland and most of California, according to a seasonal forecast prepared for the state Department of Water Resources.

But long-term forecasts always come with a big dose of uncertainty, and that is especially true this winter, when neither El Niño nor La Niña is expected to dominate weather patterns.

“We have to take it with a grain of salt,” said Jeanine Jones, DWR’s interstate resources manager. “But it’s a reminder that we should think about being prepared for 2014 being dry.”

The forecast, developed by a University of Colorado scientist, is based on statistical models that look at global weather patterns and compare them with the historical record to see what happened in California under those conditions.

The scientist, Klaus Wolter of the Cooperative Institute for Research in Environmental Sciences, predicted mostly dry conditions for the state, especially Southern California. But he said there was a slight chance that El Niño conditions could develop in the spring, bringing some late-season wet weather to the Southland.

The outlook for the Colorado River basin, an important Southern California water source that is stuck in a severe, long-term drought, was a bit better. Winter precipitation in the basin could be near normal to drier than normal, according to the forecast.

“It’s heartening to say we may not be quite that dry” on the Colorado, Jones said, adding that the basin has experienced drought conditions in 11 of the last 14 years.

As a result of the drought years, Lake Powell and Lake Mead, the Colorado’s biggest reservoirs, are less than half full.

In California, statewide reservoir storage is about 69% of the norm for the date, thanks in part to record high precipitation in late 2012.

Although this year has thus far been the driest on record in many parts of the state, the calendar year is not what water managers pay attention to. They look at the water year, which runs from Oct. 1 to Sept. 30.

“Neither of the last two years were horribly dry from a water year standpoint,” Jones noted.

Then there are atmospheric rivers, the bands of atmospheric moisture from the Pacific Ocean that can dump huge amounts of rain and snow on the state, dramatically redrawing the precipitation picture in a matter of hours.

“We’re right in the middle of our productive water period, and these statistics can fluctuate wildly from one storm to the next,” Jones said. “We’re in a wait-and-see mode.”

Post
Covid Fatalities Tend To Be Past Their Primes: The Best Example Of This Yet
MORE...
POPULAR TAGS