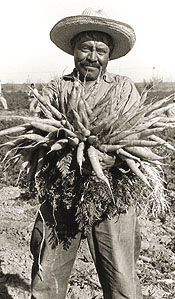 It’s hard for a normal mind to keep up with the wacky leftist groupthink that energetically runs amok in Sacramento. The project of remaking California into the perfect diversity utopia continues in the one-party state, with the latest eruption being a new law that encourages schools to include bracero history.

Last year, California became the first state to require the teaching of gay history, with an emphasis on the contributions of gay persons. So the state is maintaining its cred of being tops in the victimhood obsession.

Once our education system once taught how embracing the work ethic would lead to success in America, but the narrative now is one of a cruel society making a nation of victims requiring government rescue.

California’s governor has signed a law encouraging schools to teach the history of a guest worker program that brought in Mexican farm laborers as the national immigration debate heats up.

Many of those immigrants came to California.

The program, which ran from 1942-1964, was a crucial part of the post-war American economy, supporters said, adding that teaching its history would also highlight mistreatment of migrant workers, some of whom were never paid their due wages.

“School children will now be able to appreciate the great contributions made to this state during a critical time in our history by the Braceros,” the bill’s sponsor, state Senator Kevin De León, said in a statement.

The law, which focuses on the curriculum for grades 7-12, does not require teachers to include the Bracero program in their lessons, but encourages them to do so.

California enacted a similar law last year that required instruction in social science to include the contributions of lesbian, gay, bisexual and transgender Americans.

The governor’s focus on immigration comes as activists are becoming increasingly vocal in their demands that Brown sign an immigration bill dubbed the “anti-Arizona” that would shield some illegal immigrants from status checks by local police.

At a rally on the steps of the state capitol on Tuesday, that bill’s sponsor, Democratic state Assembly member Tom Ammiano, encouraged supporters to put the immigration debate in historical context.

“Remember history. Remember what happened to the Japanese-Americans. Remember the Chinese Exclusion Act. Remember when they wanted to quarantine gay people because of HIV. We stood up and we fought that,” Ammiano said. “California needs to take the lead on this issue.”

The immigration bill has stirred opposition from sheriffs around the state who say that the bill would unduly burden county law enforcement and pit them against federal officials.

Roughly 100 immigrant rights groups, police chiefs and mayors support the measure, which would serve as a counterpoint for what backers say is racial profiling inherent in Arizona’s crackdown on illegal immigration that was allowed to stand by the U.S. Supreme Court earlier this summer.

In passing the bill, California would stand apart not only from Arizona, but also Alabama, Georgia, Indiana, South Carolina and Utah, which have all adopted strict laws in the past two years to try to discourage illegal immigrants from settling in their states.

California has the largest population of undocumented immigrants in the United States, with nearly 2.6 million at the start of 2010, according to government figures.