California: More Moving Out Than In

The Los Angeles Times is too kind to the post-Golden State when it says the reason most leavers are fleeing is the high cost of housing. It underplays the stubborn unemployment which has hovered around 12 percent during the current recession. (See the Sacramento Bee’s interactive map.)

The joblessness is worsened by a bad business climate emanating from Sacramento that literally chases jobs out of the state with excessive regulation and taxes.

The all-Democrat state government has assured that the jobs picture will only get worse because of its insistence on a unilateral program of greenhouse gas reduction that will shoo away many more businesses to other states because of the increased costs. (See State’s cap and trade program gets final approval, SFGate.com, Oct 21, 2011)

Plus many traditional Americans find Mexifornia’s immigration-fueled diversity unpleasant as expressed in dysfunctional schools and worsened crime. More US citizens would probably leave if they could afford it. 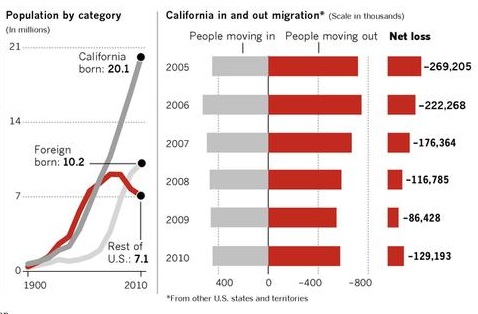 More people are moving out of the state than are moving in. It’s the economy, of course, especially housing costs.

For a clue to why California is losing its allure as a place to settle down, just ask Jennifer McCluer, who moved out of California in 2007 after she obtained her license in skin care.

McCluer would like to move back, but it’s still too expensive. “It’s really difficult,” McCluer said. “I’ve given myself 11/2 to two years to save money.”

Recent census figures show the state is losing more Californians like McCluer than it is attracting from other parts of the U.S. And the trend toward out-migration is looking less like a blip than a long-term condition.

The proportion of Californians who had moved here from out of state reached a 100-year low of about 20% in 2010, and the decade measured by the most recent census was the first in a century in which the majority of Californians were native-born.

The demographics of California today more closely resemble those of 1900 than of 1950: It is a mostly home-grown population, whose future depends on the children of immigrants and their children, said William Frey, a demographer and senior fellow at the Brookings Institution.

“We used to say California, here we come,” said Frey. “That now has flipped.”

Experts point to various causes of the turnaround, most of them rooted in a flagging economy. But exorbitant housing prices — too high for many struggling Californians despite a burst housing bubble — still play a role.

“There’s a lot of concern about driving out working-class families,” said Hans Johnson of the Public Policy Institute of California.

It was a different world in the 1950s and ’60s, when roughly half of Californians were drawn from other states by jobs and by visions of crystalline blue skies in January and beach parties in September. The state’s shining image was burnished by a public relations machine that pushed attractive suburban real estate and a wide-open field for business.

As domestic immigration slowed between 1970 and 2000, foreign immigration filled in the gap. But since 2000, even the state’s once-growing immigrant population has been frozen at 27% of total residents. Since at least 2005, more residents have left California than arrived here from other states.

The outflow, driven by high housing prices before the bubble burst, slowed as the recession brought prices down, then ticked back up in 2010 as the job picture remained dim, census data show.

And there is no sign of the old luster returning. Migration all over the United States has slowed to a crawl in this recession, and the exodus from Mexico is diminishing because of border violence and U.S. job shortages. That means the state increasingly will have to rely on the people it produces to power the economy.

Some analysts see a dark future in the loss of the demographic dynamism that has been the state’s hallmark.

“A steady-state California is both a contradiction in terms and a recipe for decline,” said historian and author Mike Davis, who teaches writing at UC Riverside.

Davis said warehousing and other commerce in inland California produces relatively few jobs, while employment in Los Angeles County is increasingly concentrated in small, poorly capitalized service businesses that could collapse in a recession.

“This is a totally different world from the days when the aerospace industry was the big engine,” Davis said.

The more static population makes it critical for California to educate and train its children to replace baby boomers as they retire, said Stephen Levy of the Center for Continuing Study of the California Economy in Palo Alto.

“It places a larger burden on the state’s ability to get everybody through high school and some post-secondary training,” Levy said.

Author D.J. Waldie, who writes about Southern California, said constant demographic change came to define the state’s sense of self. If the churning stops, California faces an unknown future, he said.

“How do we understand California when it’s not Californian anymore?” Waldie asked.

Waldie questioned whether the state could lose the competition for young, bright minds because “it’s so hard to break in here.”

Felix Eisenhauer, a classical pianist, found out just how hard after graduating from USC, when the only work he could find was waiting tables in a bowling alley.

So in 2009, he and his fiancee, who’d been downsized from a job singing with the Los Angeles Opera, moved to her hometown of Boise, Idaho. Eisenhauer, 27, now plays with a Boise ballet company and teaches piano at a local community college.

“I get to work as a musician here,” he said. Back in California, “a lot of my friends aren’t doing that.”

But though fewer outsiders cherish California dreams — and some residents have soured on them — those who depart may soon mourn what they leave behind: diversity of every stripe, mountains, ocean, climate. Especially climate.

Eisenhauer, who was born in Northern California, still loves the Golden State. Like McCluer, he hopes to return.

“My personal goal is to move back there eventually. It’s just a matter of making the finances work,” he said.

John Husing of Economics & Politics Inc., a regional research firm, said, that although the financial decline is steep and recovery will be slow, the California lifestyle is too appealing for the state to remain down forever.

Husing recalled a meeting two weeks ago with a business associate from the East Coast. An unseasonable storm was making the other side of the country even more aggravating than usual.

When the man arrived at Los Angeles International, he was exultant: His partner was stuck in Connecticut with no power, he crowed, “and I get to come to California!”