On Thursday, concerned Californians can tune in to the John and Ken Show on KFI-640 (which provides online listening) to hear a Republican gubernatorial debate

People near Anaheim can attend in person at the Ayres Hotel.

In addition, the show has a podcast for later listening. 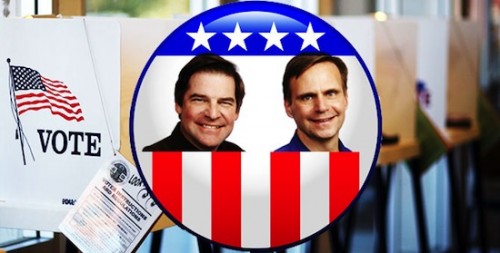 John and Ken’s take-no-prisoners approach of dealing with politicians promises a lively exchange. One of their interests is illegal immigration, so it’s likely that topic will come up.

Governor Jerry Brown has been invited, but he seems intimidated by John and Ken, so it’s likely the debate will be an all-Republican affair with Assemblyman Tim Donnelly and Neel Kashkari. Donnelly is an immigration patriot—see CA GOP Gubernatorial Hopeful Tim Donnelly Threatens To Raise Immigration Issue–Establishment Strikes Back and Immigration Patriot Tim Donnelly Rebuffs Attack, Emerges As GOP Front-Runner For CA. Gov.

Come to John and Ken’s Gubernatorial Debate 2014 on May 15 at the Ayres Hotel in Anaheim, KFI-640AM

Join John and Ken as they host the FIRST and ONLY gubernatorial debate ahead of the June 3 primary.

The top candidates will be there including Neel Kashkari and Tim Donnelly. Current Gov. Jerry Brown is on the list, but let’s see if he will show up.

It all happens on Thursday May 15, 2014! John and Ken will be doing the whole show LIVE at the Ayres Hotel in Anaheim from 3-7 PM. The debate will begin at 5PM.

Come down and decide for yourself who will be the best fit to lead California in the coming years!