The California budget is billions of dollars in the red, yet Governor Spendinator continues to hand out the citizens' money to illegal aliens, in this case the pickers affected by the freeze of some weeks back. Sacramexico doesn't even pretend to have safeguards against fraud — look who's dispensing the cash.

The money will be distributed by La Cooperativa Campesina de California, a nonprofit association that represents community-based organizations that provide services for migrant and seasonal farmworkers.

Meanwhile, Mexicans are not grateful. Their official mouthpieces have squawked up a storm over a few indiscreet (but largely true) private remarks recorded by the governor.

"I made an effort," the Austrian-born Schwarzenegger told aides last April in conversations that touched on assimilation. "But the Mexicans don't make that effort."

The governor also used an expletive to disparage the 1986 federal law that granted asylum to more than 2 million illegal immigrants.

"His comments were highly offensive and outrageous," said Assembly Assistant Majority Leader Kevin de Leon (D-Los Angeles). "It's just mind-blowing that he continues to put his foot in his mouth." [Latinos lob a few words at governor, LA Times 2/9/07]

Shown below: under the Commie mural is Angelica Salas, executive director of the Coalition for Humane Immigrant Rights of Los Angeles, who warned that the governor should be "more careful about what he says about the very people who are sustaining the economy." 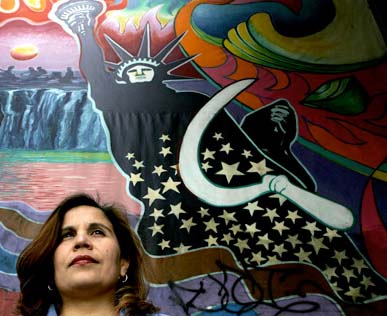