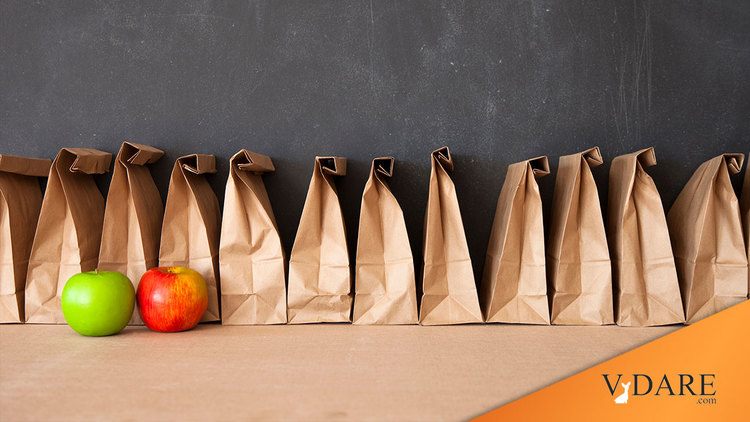 California Free Food Gets Many Takers

The Golden State is  $19 billion in the hole, but there is still plenty of free food to had, dispensed by schools even in the summer. Conveniently, many (if not most) programs have no income requirements, so the free grub is popular among poor citizens, immigrants and aliens (as well as some who can well afford to eat, according to some reports).

The idea that parents should be responsible for feeding their children is becoming less of a social norm, as the government trains residents toaccept food stamps andÂ expect to receive free food at the kid’s school.

Below, hundreds of Ventura County kiddies lined up with parents for meals on the taxpayer’s tab. 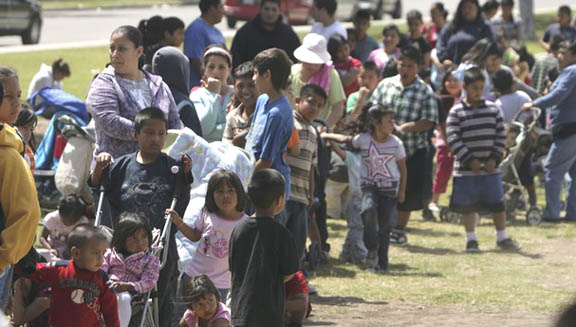 Isaac Moreno gets up early every weekday morning to beat the summer crowds at the Southwinds Recreation Center in Oxnard.

The 11-year-old, however, isn’t rushing to Southwinds to get the best spot on the playground. He and hundreds of kids like him make the early trek to be the first in line for a free lunch.

”It’s good that I get it free, so my mom doesn’t have to cook,” Isaac said as he stood at the front of a growing line of more than 600 children Thursday morning. ”My mom said it’s better for me to come here so that way I can have lunch and play at the park. The line goes all the way down to the basketball court sometimes.”

Isaac is among hundreds of thousands of children across the state who participate in the Summer Food Service program. In Ventura County, the program is organized by the Ventura Unified School District.

While some school districts have shut down free summer lunch programs because of budget woes, Ventura Unified officials said they have increased the number of children they are serving throughout the county.

Ventura Unified’s program, which started June 21 and runs through Aug. 6, has recorded a 15 percent increase in kids over last year, said Sandy Curwood, director of its Child Nutrition Services.

Ventura Unified staff members pack an average of 3,200 lunches from 5 to 9 a.m. weekdays in the Foothill Technology High School kitchen. The lunches are then picked up by various schools or community organizations such as Boys & Girls Clubs, said Kara Muniz, the district’s assistant director of child nutrition services.

”About 95 percent of our kids who participate are low-income, but the program is not just for low-income families,” Muniz said.

Over in Los Angeles County, free food is actively promoted by the school officials. The LAUSD issued a press release in June that revealed the schools’ generosity with the taxpayer’s money as well as the rather large number of beneficiaries.

Los Angeles Unified School District (LAUSD) Food Services’ officials today announced the promotion of LAUSD’s summer meal services program. The District is working towards making sure that no students in the community go hungry when schools are closed for the summer. More than 530,000 students in LAUSD qualify to receive free or reduced-price meals during the school year, but many do not get enough to eat when school is out. The Summer Food Service Program (SFSP) ensures that all children between the ages of one and 18 continue to grow and learn through good nutrition during the summer months.

Finally, there was no cost given by the Ventura article, but theÂ National School Lunch Program cost $9.3 billion in FY 2008 for the federal part of the funding.