In California, we now know the Republican candidate who will run for the US Senate, Elizabeth Emken, whom the LA Times describes as a “Danville autism activist.” 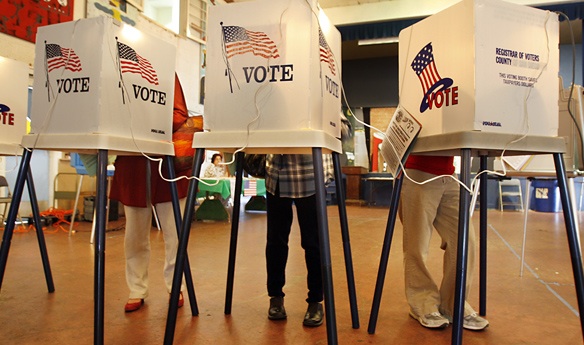 Emken, who won the California Republican Party endorsement, was one of 23 candidates running against Feinstein on today’s primary ballot. Most of the remaining candidates won 2 percent of the vote or less.

Feinstein easily captured the top spot in today’s primary, which allows all voters to select between candidates of all political leanings. The 78-year-old incumbent is winning 50 percent of the vote in early returns.

Emken’s issues statement on immigration is not reassuring. She says she is against amnesty, but wants a “comprehensive solution” that “starts” with border security.

That sounds like a process that ends with a “path to citizenship” for millions of lawbreakers.

Not that Emken has much of a chance against the Feinstein edifice in blue-blue California where the Republican party has been snuffed into irrelevance largely by immigration-fueled demographic change.

Q: How would you address illegal immigration?

A: Everyone knows this system is broken. Our U.S. Senator Dianne Feinstein has been in office for twenty years and she has done nothing to fix this problem. We cannot fault those who are drawn by the opportunity and promise of the American way of life. They are acting in their families’ best interest, as we would in the same situation. But we must approach the illegal immigration issue with a comprehensive solution that starts by securing our borders. There’s no reason why the United States of America cannot secure its borders, and until we do, we cannot adequately address the other problems with immigration.

We also need to ensure that we have a vibrant guest worker program that provides for our farms’ labor needs. Those families that are here working legally must pay their taxes and secure required drivers licenses, auto insurance and similar necessary items.

I believe amnesty would only make the problem worse, and I am not in favor of amnesty. Those that are here illegally must go through the proper legal immigration system.

These are tough questions, and we must have an honest discussion on how to solve the problems created by our lack of border security. That includes bringing together affected communities, business and labor leaders, and others to work out reasonable solutions to issues.