The Golden State has been more golden brown than usual the last few years, as it has suffered a historic drought. We all had our fingers crossed when professional weather wonks forecast a huge rainy season for 2015-16 because of a monster El Nino which normally brings a lot of precipitation.

The good news is the rains came in the fall and early winter, but the faucet went dry in February. The rainfall was decent, but nothing like the biblical stuff forecast that prompted many homeowners to schedule roof repairs in preparation.

Still, there is snow in the Sierras where a lot of water supply is naturally stored. Last year’s snowpack amounted to just 5 percent of its normal water content, the lowest in 500 years according to tree ring data. The situation was dire, with no Plan B forthcoming from Sacramento. But Nature was semi-kind this year, which is good because prolonged drought can be a civilization killer.

Meanwhile, California continues to be a magnet for immigrants, and the foreign-born are the major source of the state’s population growth. Unfortunately, too many people residing in a largely low-rainfall state is a drought disaster waiting to happen. Granted, the majority of water use is for agriculture, but when drought hits, the government hectors average city dwellers to cut their usage. 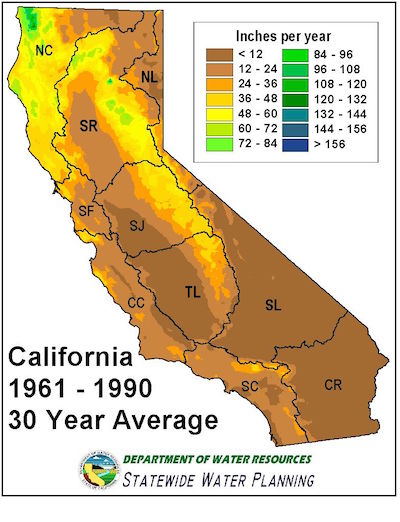 The Sacramento Bee had a front-page feature article on Friday bemoaning the general disappointment in the highly touted El Nino.

Sacramento is in the peak of its rainy season, but there is no substantial rain in the forecast for the next two weeks. The Sierra snowpack has fallen below normal levels for this time of year. The state’s three largest reservoirs remain far below capacity.

Throughout the summer and fall of 2015, California residents waited in anticipation as they heard about the strong El Niño weather pattern brewing in the Pacific Ocean. We remembered the winters of 1997-98 and 1982-83, when such strong El Niños corresponded with deluges. And we hoped for relief from our long, brutal drought. 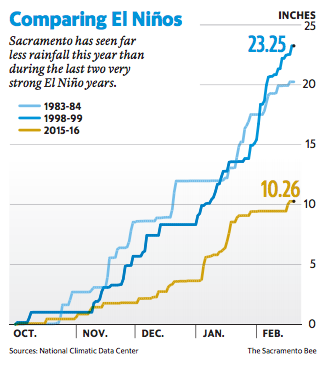 Patzert said the timing of the precipitation varies with the intensity of the El Niño pattern, which is a function of warmer-than-usual water temperatures in the Pacific Ocean. In 1998, the water temperatures peaked in November and much of the rain fell in February. In 1983, it peaked in January – as it did this year – and the bulk of the rain came in March and April.

“It’s possible there’s another shoe to drop. There is still a lot of warm water out in the Pacific,” Null said. Water temperatures are still considerably warmer than normal.

But during the next seven days, the only rain in the forecast is a mild system arriving Friday night that likely will bring less than one-tenth of an inch of precipitation to Sacramento.

The 8-14 day outlook from the federal Climate Prediction Center also is discouraging. It predicts a strong chance of below-average precipitation throughout California for March 3-8.

Null said this year’s winter is yet another example that El Niños are unpredictable and any long-range weather forecast is suspect. The nexus of warm water in the Pacific is further west than usual this year. That is a big factor in determining where the rain will fall. Often El Niño brings heavy rain to Southern California; this year it’s been rainier in Northern California, and portions of the Pacific Northwest have gotten record precipitation.

“We don’t know all the answers,” Null said. “This has sort of become the poster child that all El Niños are different.”

Even if the rains return with a vengeance, Patzert doesn’t expect El Niño to end the drought.

“Everybody expected this El Niño to be the great…drought-buster, but that was never going to happen. It took us 15 years to get into this drought. No matter how successful the rainfall might (be) in February and March, we were still going to be in a drought when it was all over…Lake Mead has never been this low before. Lake Oroville and Lake Shasta are not going to fill up no matter what.”