In decades past, people actually moved to California for the superior education, from K-12 through college, and the other opportunities that would benefit their children. Today, middle class people are fleeing Mexifornia to find communities still recognizable as America, where it's not necessary to place youngsters in private school to have them speak English all day.

Now another educational study has shown that your kids will be better off if they are raised in monocultural America than in bastions of earnest multiculturalism. California has invested huge amounts of money into keeping its educational system afloat 151 over $66 billion for K-12 for 2006-7, a 6.6% increase over the previous year 151 as the state tries vainly to hold up against the tsunami of illiteracy and diversity.

But throwing money at Mexican children, coming as they do from an unscholarly culture, doesn't help. The high school graduation rate of hispanics is still pathetic (around 50 percent), a social norm that doesn't improve much over several generations. As Sam Huntington pointed out, less than 10 percent of fourth-generation Mexican-Americans earn a post-high-school degree, compared with 45 percent of Americans as a whole.

So it's not surprising that the Mexican malaise is spreading within the California host.

The national map of the study's results shows that even rich states can be brought down by excessive immigration and poor states near the border have little chance of holding their own. 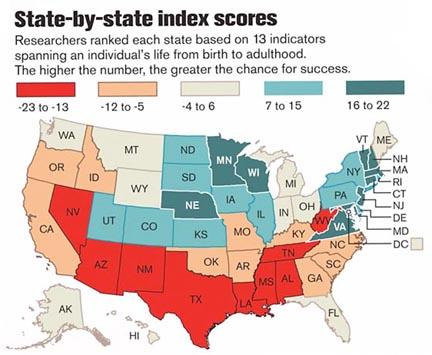