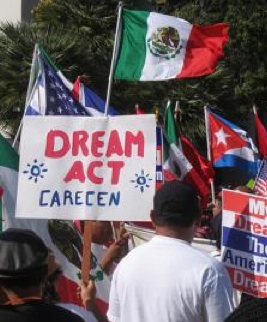 In California, illegal alien college students already get in-state tuition, courtesy of the beleaguered taxpayer. But that was not enough. Now they must have even more of the public’s scarce funds, even though the state’s system of universities has been deeply damaged because of budget cuts.

Even so, California Democrats are determined to redistribute the citizens’ money, taking financial aid from worthy young Americans and giving it to illegal aliens from Mexico and beyond. New reports are full of stories about college students who cannot graduate because courses they need are not being given as a result of budget cutbacks. In such a climate, goodies for illegal alien students nevertheless remain a top priority for Democrats.

Analysis estimates that the legislation will cost $40 million.

In Sacramento, the Mexican tail wags the Democrat dog. The Hispanic legislators get whatever they want, no matter what it costs or who it hurts.

Today’s example of this political fact was the passage by the Senate of the California DREAM Act.

The state Senate on Wednesday approved the second half of contentious legislation that would allow students who are illegal immigrants to apply for state-funded scholarships and financial aid.

The Senate approved AB131, also known as the California Dream Act, with a 22-11 vote, leaving it just one step away from the governor’s desk.

The state Assembly must consider changes to the bill it previously passed before it can go to Gov. Jerry Brown.

“These students are valedictorians, they’re class presidents, and they’re all-star athletes. They are the future of California,” said Sen. Charles Calderon, D-Whittier, who carried the bill in the Senate.

Critics say allowing access to those state resources encourages illegal immigration. Supporters counter that the students, many of whom were brought to the United States as young children, shouldn’t be punished for their parents’ actions.

Sen. Doug La Malfa, R-Willows, opposed the bill Wednesday. He read a letter from a constituent who said his daughter’s California education grant was recently cut. He said passing a law such as this would be like rubbing salt in his wound.

Cedillo’s legislative package differs from the federal Dream Act, a proposal that would create a path to citizenship for those who are brought to the country illegally as children.

Under the bill approved Wednesday, illegal immigrant students would have to meet the same requirements as others but only would qualify for financial aid that remains after legal residents apply.