California Dials Back Ethnic Studies for All High Schoolers

Here’s some rare good news from crazy California—a planned program to indoctrinate all state high school students about the alleged blessings of diversity hit a wall of disapproval in comments from the public. As a result, it’s back to the drawing board for propagandists to repackage their Ethnic Studies class into something less objectionable over the next year.

Two major complaints about leftist bias concerned the course’s anti-Semitism and the idea that “capitalism inherently exploits people of color.”

Who could have predicted that from far-left California Democrats??

One interesting item was an incomplete photo (see below) of an ethnic studies class project that showed an explanation of Maya math (so far, so good) and also two drawings of imaginative transportation—a bicycle and a scooter, even though the wheel did not exist in the pre-Columbian Western Hemisphere. Whatever are they teaching the kiddies in their diversity classes? 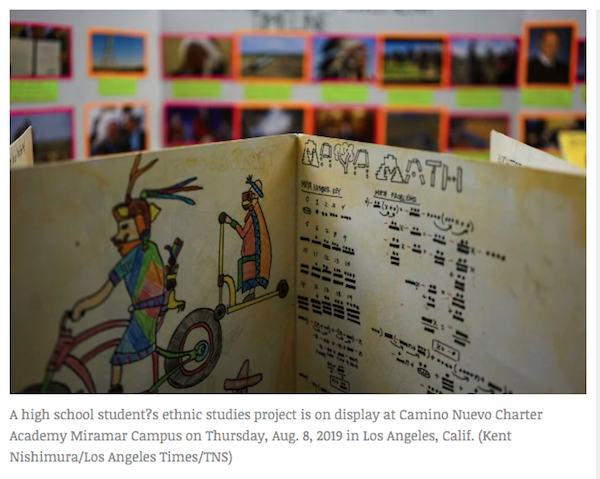 And of course, you can’t have diversity without victimhood, so one article had a Hispanic student learn from her research that her father was actually an illegal alien. But Angela’s ethnic studies class assured her that she was still valuable and could feel “comfortable” with herself, even though her family’s presence in America was stolen from the start.

Ethnic studies may soon be mandatory. Can California get it right?, Los Angeles Times, August 13, 2019

Angela Warren always assumed her father, a native of El Salvador, entered the United States via airliner. It took an assignment in her high school ethnic studies class to learn that he crossed the border alone at 14, terrified of being caught. When he reached the American side, he fell to his knees and gave thanks.

That eye-opening view of her family’s past inspired Warren’s mission to change the present. At a time when watching the news can make her feel anxious and helpless, Warren, now an 18-year-old college student, said it’s the lessons of her ethnic studies class that generate intellectual awakening and empowerment.

“It made me feel comfortable with myself knowing my family history and knowing the history of our people,” said Warren, who attends Marymount California University.

In actions that would affect more than 6.5 million California students, state lawmakers are poised to make ethnic studies a graduation requirement in high school and at Cal State universities, raising the stakes for a team of educators drafting the model curriculum, those who are arguing for changes to it, and also for critics — who see an academic field dominated by one-sided, insular political correctness and separatism.

“How do we not talk about those issues on Day 1 with our students?” the Camino Nuevo Charter Academy teacher asked. (Continues)