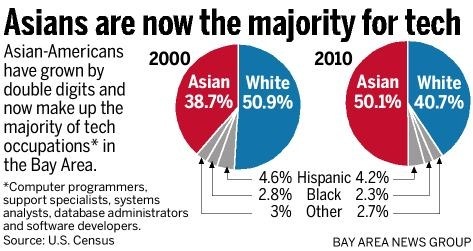 Demographic change keeps happening, as indicated by recent news from Silicon Valley and neighborhood: Asians have become the majority of workers in the San Francisco Bay Area’s tech workforce, an increase of more than 11 percent in a decade. There has been a corresponding decline of white workers as well. 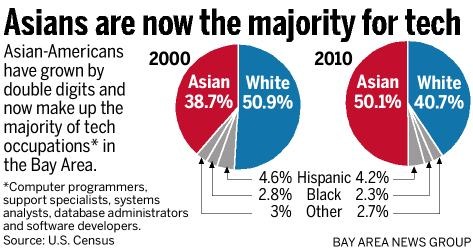 What happened to those white tech workers? Sixty Minutes provided one answer in a 2010 segment which profiled once-comfortably middle class people who were running out of unemployment checks and were depleting their savings — a position which would have been unimaginable a couple years earlier.

It doesn’t help that experienced, over-40 workers are considered too old to fit into today’s hip young workplaces. The new advice for unemployed techies is to ditch the conservative interview suit and wristwatch, and adopt a younger look, according to Silicon Valley’s dirty secret: Age bias:

“I don’t think I would have been able to get this CEO job if I hadn’t shaved my head,” says Adams, who has founded eight venture-backed companies. He is now chairman of the company that hired him, mobile conference-call service Socialdial, and is fundraising for a new business. Adams has supplemented his makeover by trading in his button-down shirts for T-shirts, making sure he owns the latest gadgets, and getting an eyelid lift. 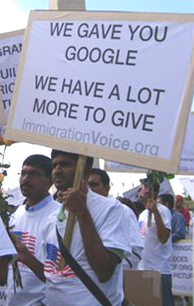 And why would companies need to hire older workers when Washington provides a plentiful supply of young H-1b employees from abroad? They are happy to be exploited in the hope of getting a permanent visa, and believe they deserve those positions, having been told they are superior.

Meanwhile, the ever-helpful Republicans of the House just passed a bill that would replace the 55,000 Diversity Visas with the same number of employment visas for foreign STEM graduates.

The older unemployed white tech workers of Silicon Valley have no friends anywhere, it seems.

Asian-Americans make up half of the Bay Area’s technology workforce, and their double-digit employment gains came from jobs lost among white tech workers, according to an analysis by this newspaper of Census Bureau data released Thursday.

The dramatic shift in the changing composition of the high-tech workforce represents a new generation of homegrown and imported workers drilled in science, technology, engineering and math studies. But the shift in workplace demographics — at least among tech companies — fails to reflect the gains of California’s Hispanic and Latino population, which lost ground in tech jobs along with African-Americans.

“It’s the new world — a world in which whites are not the majority,” said Jan English-Lueck, associate dean of the college of social sciences at San Jose State University, who is also co-founder of the Silicon Valley Cultures Project. “Other people are being displaced.”

The percentage of Asian tech workers grew from 39 percent in 2000 to just more than 50 percent in 2010 in Santa Clara, San Mateo, Alameda, Contra Costa and San Francisco counties combined, according to Census Bureau statistics.

At the same time, white workers saw their more than 50 percent majority of tech jobs in 2000 fall to nearly 41 percent, according to the numbers released Thursday.

The Census Bureau changed the way it categorized some computer and related jobs in 2000, so the Mercury News analysis of the latest data was based on tracking the changes in categories that appeared both in 2000 and 2010.

Tech companies, Lewis said, “do not want to employ Americans. They import labor from overseas, pushing for H-1B visas. Check the job boards. They basically say, ‘H-1B Visa. Americans need not apply.’ For years, women, blacks and Latinos have been kept out of the tech job market. Now white men are being forced to train their replacements.”

Lewis has organized protests against tech companies, demanding more transparency into their work forces because, she said, “You can be next in the unemployment line.”

Several high-profile tech companies contacted by this newspaper did not respond to requests for comment.

“Diversity actually increases the profitability of these companies,” Lewis said. “In California, the minority is now the majority. How do you market your products and services to people you don’t understand? How can your business survive? These companies still don’t get it.”

The tech employment picture hardly represents the growing number of Hispanics and Latinos who make up 27 percent of Santa Clara County, English-Lueck said.

But it does reflect the young and growing number of Asian-Americans “who were raised with a very strong STEM (science, technology, engineering and math) background” and are going into high tech.

Asian-American software developers, in particular, saw huge gains all around the Bay Area: from nearly 45 percent of those workers in 2000 to more than 53 percent in Alameda County; and from nearly 50 percent to nearly 60 percent in both San Mateo and Santa Clara counties, the center of Silicon Valley.

Ryan Shelby, a 28-year-old African-American doctoral candidate in mechanical engineering at UC Berkeley, said young African-American and Hispanic students are often raised in communities that don’t stress science and math curriculums that are likely to guide them into tech jobs.

Shelby grew up on a farm in Letohatchee, Ala., where his love for engineering started by working on his father’s tractor.

“I’ve been beating my head over this,” Shelby said. “There’s a lack of mentorship early on for a lot of these young students, who don’t have these facilities and teachers to expose them to math, science and technology early on.”

So Shelby supports greater outreach to women and underrepresented minorities at UC Berkeley’s College of Engineering, which now has an associate dean of “Equity and Inclusion.”

While 34 percent of African-American and Hispanic students start out in engineering across the country, only 13 percent leave with degrees, he said.

Now, as a 19-year-old junior at SJSU studying computer science, Leu said many non-Asians don’t appreciate “the Asian culture, where there is a deep work ethic that America hasn’t really bought into yet.”

“Do I worry about a backlash?” Leu asked in response to a question. “It’s not so much a backlash against Asians, but … there needs to be a balance. I’m just trying to find it.”