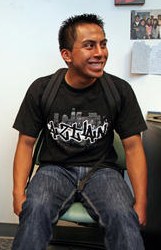 The issue of taxpayer-funded financial aid for illegal alien students in the state has been moving along through the system, and now it is here. Jerry Brown signed the California Dream Act into law in October 2011.

As Assemblyman Tim Donnelly remarked at that time, “Tuition rates have been going up, the universities have budget cuts of $1.2 billion and there are lotteries for classes – but if someone is here illegally, we roll out the red carpet.”

The photo shows cheerful UC Berkeley freshman Jose Lopez, an illegal alien. Look closely and you can see he wore his Aztlan t-shirt, apparently as an extra screw-you statement to stupid-generous America.

Of course, 20,000 illegal aliens students means that number of citizen kids have been displaced, not to mention the unwelcome costs for taxpayers. Early in the debate over the bill, supporters claimed it wouldn’t cost much, maybe $13 million, but now we see that in three years the price tag will be $65 million.

Meanwhile, Sacramexico has closed 70 state parks to save a piddly $11 million while squandering far more on the education of illegal alien foreigners.

Interestingly, a September Field Poll found that 61 percent of California voters did not think illegal aliens should get the same tuition break as citizen kids, and the survey didn’t even ask about additional financial aid on top of subsidized tuition.

More than 20,000 college-bound students are seeking state financial aid for the first time under California’s new Dream Act laws that allow them to get the help despite their immigration status.

While far from a complete picture, that number is the best indicator yet of how many students hope to benefit from a pair of laws that could radically change the college experience for a generation of students whose parents brought them to the U.S. illegally when they were young — the same group that has taken center stage in the national immigration reform debate.

“For many of them, it’s a game-changer,” said Meng So, who coordinates UC Berkeley’s months-old Undocumented Student Program.

As college-bound high school graduates await word of their state financial aid — Cal Grants — other kinds of help have begun to flow for students already enrolled in public colleges and universities.

In January, UC Berkeley freshman Jesus Lopez was one of many college students who under the same Dream Act began to receive campus grants or fee waivers based on need — help previously limited to legal residents.

The aid made a big difference in his studies: This semester, the business major from San Jose moved from a crowded apartment 1¿1/2 miles from his classes to within walking distance. He joined clubs, signed up to volunteer and stays up late studying in Moffitt Library.

California was one of the first states to offer in-state tuition to illegal immigrants who attended one of its high schools. Now, roughly a dozen do so. Only two other states — Texas and New Mexico — give financial aid to this group of students, according to the National Conference of State Legislatures. Oklahoma passed a similar law but reversed it.

It will cost the state about $65 million a year by 2016-17 to extend the benefits to illegal immigrants and those granted temporary legality under the federal Deferred Action for Childhood Arrivals program, the nonpartisan Legislative Analyst’s Office predicts. The estimate does not include campus aid administered by CSU and UC, grants funded mainly through tuition.

Thousands of college students could be already benefiting from campus grants and waivers.

For example, San Jose State has given grants this term to 83 students because of the state’s Dream Act, CSU East Bay has awarded 40 and De Anza College in Cupertino waived fees for 139 students.

In addition, the California Student Aid Commission expects later this year to award Cal Grants to about 6,000 students through the state Dream Act — about one-third of those who submitted a complete application.

The commission expects to award $19.5 million in Cal Grants this year to the newly eligible Dream Act students, about 1.1 percent of the $1.7 billion total. The inclusion of illegal residents hasn’t made it harder for legal residents to get tuition help, as the Cal Grant is given to anyone who qualifies, and the state budgeted for the grants expected this year.

The number of students receiving campus grants under the Dream Act is so small that the effect on resident students is negligible, said Rhonda Johnson, CSU East Bay’s financial aid director. “It would be really hard for a student to argue that ‘I would have gotten it had you not given it to those Dream Act students,’” she said.

Johnson said she looks forward to the university’s Welcome Day this spring. Until now, when students told her about their legal status and asked about financial aid, she had to turn them away.

“It’s very difficult to see the disappointment on a student’s face when I have to say, ‘I’m sorry, unfortunately you don’t qualify,’” she said. “And so now I can say, ‘You do.’”