Mexico's Presidente Calderon never misses an opportunity to backstab the United States in the ongoing aggression by our non-friend to the south.

The latest effort is Mexico's new law supposedly to protect OTMs as they pass through to the United States. There has been a lot of bad press over massacres like the Zeta gang mass murder of 72 passers-through last August, so some sort of action, however insincere, was needed.

It has also been a bone of contention that Mexico's immigration enforcement has been quite tough, while the Mexicans have hypocritically squawked loud and long about Arizona's SB1070.

So the pols have plopped out some new legislation, although it won't stop gangs doing whatever they please. Plus it's doubtful that non-Mexicans will suddenly be made welcome, when they haven't been before. One Central American complained that they were "clubbed like seals in Canada."

The law seems mostly window-dressing, with generous-sounding items like healthcare and education for illegals in Mexico.

But who goes to Mexico to get the freebie services? There aren't any for the Mexicans; it's why they leave. The law a gimmick to snipe at the United States for not having open borders with free everything for Mexes. Don't miss Calderon's carping at the end where he sniffs that "the United States does not have a legal framework that permits this natural flow."

No, the US has only the most generous system of legal immigration on earth, plus an alphabet soup of work visa programs, including H2A for field workers.

But what would the Presidente of a failing state know about law anyway.

The measure decriminalizes entering Mexico without papers and entitles the undocumented to education and health services. It also promises a big overhaul of the scandal-plagued immigration agency.

They looked like spooky, glow-in-the-dark Gumby figures. Hundreds of migrants from eight countries packed cheek to jowl in the back of two cargo trucks, stretching and contorting to find space and air. 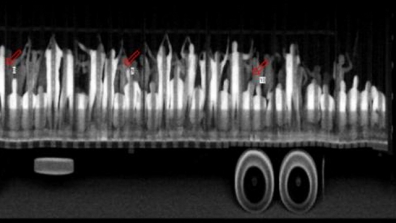 Their images were captured by an X-ray scanner inspecting vehicles in southern Mexico. The discovery on May 17 - the largest single interception of smuggled foreign nationals - once again turned up the pressure on Mexico to safeguard migrants who cross the country on their way to the United States, a journey that has become dangerous and costly.

Nearly 500,000 people from Central America and beyond traverse Mexico each year en route to the U.S., according to the Mexican government human rights office. Most now have to pay a smuggler, and increasingly, they are kidnapped, held for ransom and in the most brutal of cases, killed. Their tormentors are criminal gangs often working in cahoots with Mexican immigration and police agents, authorities say.

President Felipe Calderon, his administration chastised by foreign governments for how their citizens are treated, this week signed a new immigration law aimed at reducing the risks. The measure decriminalizes the act of entering the country without papers and entitles the undocumented to education and health services. It also promises a major overhaul of the scandal-plagued federal immigration agency.

"Migration puts people in a very serious situation of vulnerability," Calderon said. "It puts them in humiliating conditions, exposed to every kind of abuse."

The law requires immigration agents to undergo special training and vetting, and it establishes criminal penalties for agents who abuse migrants or violate their rights. It also seeks to streamline paperwork for migrants. Although an undocumented foreigner is not to be considered a criminal, he or she is required to obtain papers that might include a so-called humanitarian visa.

Nearly 200 agents have been fired in the last year for a number of infractions, and 40 are facing jail time, said Salvador Beltran del Rio, head of the governmental National Institute of Migration. Seven regional directors were fired this month amid allegations that agents had delivered Central American migrants to kidnapping gangs. Two more agents were arrested last week on charges they were forcing female Central American migrants into prostitution.

Human rights advocates were skeptical that the new law would relieve migrants' ordeal, in large part because these men and women have so often seen authorities colluding with the gangsters and remain reluctant to cooperate with officials.

"Most have no desire to denounce what has happened to them," said Alberto Xicotencatl, who helps run a network of church-based shelters for migrants in the north-central city of Saltillo. "If they escape a kidnapping, most just want to go home."

Not only has the journey across Mexico become more dangerous for migrants, it has also become more expensive - and wildly lucrative for those controlling the routes and arranging the kidnappings and extortions.

In the May 17 interception, authorities found 513 migrants crammed into the two tractor-trailer trucks in what were described as horrific conditions. It was sweltering hot, and there was no fresh air and little water. Most told authorities they had paid $7,000 a head for the trip, which would represent a take of nearly $3.6 million.

While the vast majority of the migrants were Guatemalans, a dozen were from India and a handful from Nepal and China, as people from far-flung corners of the world look to the Mexican route for entry into the U.S. Authorities say more than 2,000 people listed as Asians were registered at migrant shelters in Mexico last year.

The massacre last summer of 72 mostly Central American migrants, purportedly by the notorious Zeta cartel, stands as the single deadliest incident in 4 1/2 years of drug-war fighting. This spring, nearly 200 bodies were found in mass graves in the northern border state of Tamaulipas, and many of the victims are thought to have been on their way to the U.S. in search of work.

Calderon, in signing the new law, said he hoped that bringing immigrants out of the shadows of clandestine living would make them less likely to fall victim to the "evil and perverse" trafficking gangs - especially since migration from Mexico to the U.S. is an economic phenomenon that is not going away.

"As long as the United States does not have a legal framework that permits this natural flow and channels it in an orderly way," Calderon added, "migrants will continue to run the risk of becoming part of a market run by unscrupulous criminals. That is the reality."