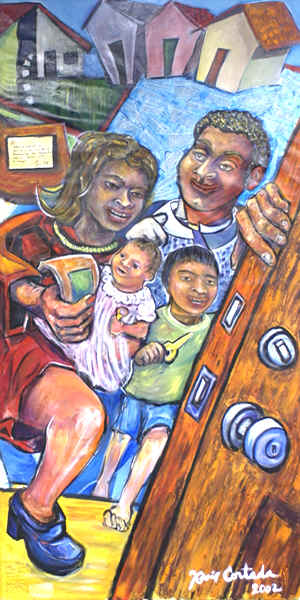 Here's the official mural, entitled "Stepping Into the American Dream," that Javier Cortada was commissioned to paint for President Bush's October 15, 2002 White House Conference on Minority Homeownership, in which Bush denounced down payments as the chief barrier to adding 5.5 million additional minority homeowners. Bush orated:

"Two-thirds of all Americans own their homes, yet we have a problem here in America because few than half of the Hispanics and half the African Americans own the home. That's a homeownership gap. It's a — it's a gap that we've got to work together to close for the good of our country, for the sake of a more hopeful future. We've got to work to knock down the barriers that have created a homeownership gap.

I set an ambitious goal. It's one that I believe we can achieve. It's a clear goal, that by the end of this decade we'll increase the number of minority homeowners by at least 5.5 million families. (Applause.)

Some may think that's a stretch. I don't think it is. I think it is realistic. I know we're going to have to work together to achieve it. But when we do our communities will be stronger and so will our economy. Achieving the goal is going to require some good policies out of Washington. And it's going to require a strong commitment from those of you involved in the housing industry.

Just by showing up at the conference, you show your commitment. And together, together we will work over the next decade to enable millions of our fellow Americans to own a piece of their own property, and that's their home.

I appreciate so very much the home owners who are with us today, the Arias family, newly arrived from Peru. They live in Baltimore. Thanks to the Association of Real Estate Brokers, the help of some good folks in Baltimore, they figured out how to purchase their own home. Imagine to be coming to our country without a home, with a simple dream. And now they're on stage here at this conference being one of the new home owners in the greatest land on the face of the Earth. I appreciate the Arias family coming. (Applause.)...

To open up the doors of homeownership there are some barriers, and I want to talk about four that need to be overcome. First, down payments. A lot of folks can't make a down payment. They may be qualified. They may desire to buy a home, but they don't have the money to make a down payment. I think if you were to talk to a lot of families that are desirous to have a home, they would tell you that the down payment is the hurdle that they can't cross."

Here's the HUD press release about the mural: Cortada painted the mural at the White House Conference on Minority Homeownership, held on October 15 in Washington, DC. The painting illustrates the Blueprint for the American Dream Partnership, a collaborative effort of the Bush Administration and members of the housing industry to meet the President’s goal of 5.5 million new minority homeowners by the year 2010.

prez-message.jpg (62960 bytes) ”The Bush Administration is committed to helping people across the country realize the American Dream,” Martinez said at the unveiling ceremony. ”We are proud to work with our partners in the private sector to achieve the President’s ambitious goal. This mural is a visual representation of our strong mutual commitment.”

Stepping into the American Dream, 96”x96”, is acrylic and mixed media on canvas. Images in the mural are meant to represent the various avenues through which individuals and families can achieve homeownership — homebuyer education, adequate supply of affordable homes, down payment assistance, and mortgage financing.

The mural features short messages from new homeowners throughout the country, as well as from President Bush, Martinez, and other members of the Blueprint Partnership.

Cortada has exhibited his works in museums, galleries and cultural venues around the world. He has served as Artistic Director of various efforts sponsored by Miami-Dade Art in Public Places, including Master Peace (a school-based art project in Miami-Dade County Public Schools) and PATH (Public Art Transforming Housing).