Bulgarians Aren't Pleased with the Flood of Syrian Refugees

A giant crowd of Syrian refugees has reached Europe, safe from the bombs and shooting at home, that’s the good news for them. The bad news is that at least 11,000 have gotten to Bulgaria, Europe’s poorest nation which is not prepared to be welcoming.

The American media is frustrated about the Syrian situation because the human suffering is genuinely terrible, and the press doesn’t know whom to blame, other than the obvious warring Syrians themselves who as victims are not eligible in the liberal media mind.

The New York Times used the influx as an opportunity to bash Bulgarian “right-wingers” who are fearful of crime, cost and cultural conflict.

SVILENGRAD, Bulgaria — After spreading turmoil and desperate refugees across the Middle East, Syria’s brutal civil war has now leaked misery into Europe’s eastern fringe — and put a spring in the step of Angel Bozhinov, a nationalist activist in this Bulgarian border town next to Turkey.

The local leader of Ataka, a pugnacious, far-right party, Mr. Bozhinov lost his seat in the town council at the last municipal elections in 2011 but now sees his fortunes rising thanks to public alarm over an influx of Syrian refugees across the nearby frontier.

Membership of the local branch of Ataka, he said, had surged in recent weeks as “people come up to me in the street and tell me that our party was right.” [. . .]

The Times went on to mention Bulgaria’s miserable economic condition, but it didn’t discuss the religious and historical background. Bulgaria has been part of the embattled territory between the Christian and Muslim worlds for centuries. Over three-quarters of the population are Eastern Orthodox Christian, with a 10 percent minority of Muslims. The Islamic population is a reminder of the 500 years of Ottoman rule of Bulgaria, which was marked by the oppression of Christians as sharia law was enforced.

Around 90 percent of Syrians are Muslim, with around 10 percent Christian. So it’s hardly surprising that Bulgarians regard Syrians with dread. If Syrians were expecting a warm welcome from a depressed corner of historically Christian Europe, they were delusional.

Below, Syrian refugees are not pleased with accommodations in Bulgaria. (Do they know that Sweden has offered to welcome any and all Syrians?) 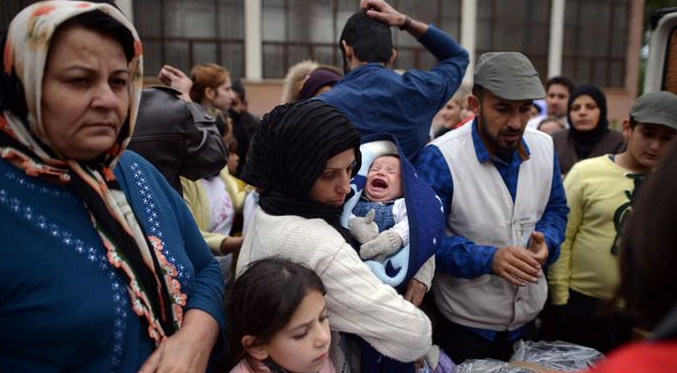 PBS took a look this week and yes, the suffering is profound. But it’s Muslims, who don’t get along with anyone, not even other Muslims, so violent disagreements like civil wars are to be expected. It’s not Europe’s responsibility to rescue Muslims by admitting them. The Muslim world has plenty of wealth; the ummah should be taking in refugees.

JUDY WOODRUFF: Driven from their homes by civil war, Syrian refugees are fleeing,flooding across borders in numbers that have received a considerable amount of international attention. Many of them, thousands, have fled to Europe’s poorest country, Bulgaria, only to find that it is ill-equipped to handle the influx and sometimes hostile to their very presence.

Jonathan Rugman of Independent Television News traveled there recently and filed this report.

JONATHAN RUGMAN: In a small town in Bulgaria, a refugee camp like no other in Europe. Over 1,000 Syrians are crammed into housing meant for just 400. Many of them have been living without electricity or hot water for weeks. And because there aren’t enough prefab huts, some are facing winter in Bulgarian army tents.

Whatever the horrors of war they left behind, nothing prepared these Syrians for a European welcome as warm as this.

Jadia Al-Daim was a teacher, now finding herself sharing a tent with three Syrian families many miles from home.

WOMAN: I have family back there, so I have — I’m thinking about them all the time. It’s not easy. I didn’t say goodbye to my family. And they came here. I thought it would be much better. But I was wrong.

JONATHAN RUGMAN: Would you ever go back?

WOMAN: Yes, I will go back today, before tomorrow.

JONATHAN RUGMAN: But there is no turning back. These families, mostly Kurds from Northern Syria, have already paid smugglers 300 euros each to cross into Europe from Turkey. It can take up to a month to be registered as a refugee here.

And then the Bulgarians give them just one euro a day each with which to feed themselves. Menau told me she and her children had fled from jihadist groups and that their home was bombed. Rashid was once a tour guide in Damascus. His own tour of Europe has not started well.

RASHID JAMIL, refugee: And coming here, it’s different, not what we think or what we have dreamed or something like that. That’s a big problem for us, but what we can do? We are in here now.

JONATHAN RUGMAN: Rashid walked for 10 hours to reach Bulgaria, one of a steady stream of Syrians caught here on heat-sensitive cameras by Bulgarian police.

Here, the border guards are waiting to ambush new arrivals. When they do, the refugees can be seen cowering as they are rounded up in the early hours of the morning. We joined a Bulgarian border patrol. The guards say this route into Europe has become popular since the Greeks built a fence last year. Now the Bulgarians have begun building a fence of their own.

They are catching 10 times the numbers they did a year ago, rounding them up in this processing center which is full to overflowing. The U.N. has repeatedly described conditions for refugees here as unsafe and dire. But we weren’t allowed to meet these brand-new arrivals.

The camps in Turkey are already overloaded, and the Bulgarians say they too are in danger of being overwhelmed. Turkey, which is just on my right here, has taken in about half-a-million Syrian refugees, Bulgaria, by comparison, about 5,000, but this is fortress Europe at a time of austerity. And the presence of some 5,000 Syrian refugees has become one of the biggest political issues of the day here.

In the capital, Sofia, crowds have been protesting that the poorest country in Europe can’t take any more foreigners and that the border should be sealed shut.

MAN (through interpreter): We have warned that the increase in legal immigrants will increase the criminal situation. It will start clashes and increase tensions, leading to social, religious and social unrest in Bulgaria.

JONATHAN RUGMAN: Syrians now live with the constant threat of racial violence. In a hospital, we found the brothers and sisters of 17-year-old Ali from Aleppo comforting him after he was punched and stabbed. His mother showed me the wound inflicted by an attacker on the outskirts of the refugee camp in the capital.

MAN (through interpreter): When I started screaming, he escaped.

And then I went to the police at the checkpoint. I told them that I had been stabbed, so they called the ambulance and took me to the hospital.

JONATHAN RUGMAN: Ali was attacked outside this derelict school, which is home to some 800 Syrian refugees. Fifteen members of his extended family now live and sleep in this one room. They say their home was hit by Syrian jets, so they crossed into Turkey, and carried this old woman for much of their six-hour trek to Europe.

WOMAN (through interpreter): We had four rooms downstairs and four rooms upstairs. Our home was a two-story building. At least the children can sleep here, because they cannot hear the sound of bombing and warplanes.

JONATHAN RUGMAN: Her children are too frightened to play with those outside, even though the camp is guarded by Bulgarian police. So they play in the schools’ corridors, which double up as dormitories.

This used to be a classroom. Now 10 Syrian families live in each one. There is no laundry and no kitchen either, not even a sink to wash the dishes. “Bulgarians are poor,” this woman said. “They can’t be expected to help us. Other nations should.”

An avenue of homes screened off with the help of tree branches, even though E.U. law demands a dignified standard of living for refugees. There is a barber, though, who says he has no regrets coming here, escaping the shadow of Syria’s civil war. But the camp’s Bulgarian commandant complains that there are no doctors, with ambulances several times a day ferrying off the sick.

MAN (through interpreter): The capacity of the camp is full. But when a family with five to 10 children arrive at midnight and they don’t have anywhere to sleep, I force myself to do the impossible and accommodate them.

JONATHAN RUGMAN: Yet, none of this reflects well on Bulgaria, accused of keeping conditions deliberately awful to deter more Syrians from coming.

You have got a situation leer where you have Syrian refugees who are living with no heating, no electricity, no running water, no doctors in the camp. Isn’t that a disgrace for a European country?

VASIL MARINOV, Bulgarian Deputy Interior Minister (through interpreter): At the moment, we are working on the water and the electricity. But, actually, we rely on solidarity of the European Union and the possible relocation of some of these refugees. You should know that Bulgaria is one of the countries with the lowest gross domestic product per capita.

ILIANA SAVOVA, State Agency for Refugees: For me as a Bulgarian, I’m really ashamed of the conditions that we put these people to, because these are people who came from war.

JONATHAN RUGMAN: But this is a poor country. That is what a lot of Bulgarians would say.

ILIANA SAVOVA: I mean, come on. It is a poor country, that’s right. But, I mean, we should be able to provide at least basic standards to these people, at least some hospitality and some basic things, like, you know, feeding them, keeping them warm, and giving them the medical, you know, attention they need.

JONATHAN RUGMAN: Europe was a dream for these refugees. Now seeking sanctuary here seems like a desperate gamble. And faced with conditions like these, their journey west in search of a brighter future will surely begin again.