Budget-Crunched U. of California to Stop Turning Away Well-Heeled Applicants Just Because They Are Dim

SAT should be suspended for UC admissions, Napolitano says

UC [University of California, not University of Chicago] President Janet Napolitano recommends suspending the SAT and ACT as admissions requirements, proposing instead a plan to make them optional for two years.

Napolitano’s logic: The University of California’s budget will need every tuition-paying warm body it can get its hands on for the foreseeable future, so we can no longer afford to turn away applicants merely for their lack of intelligence.

In a major decision that could lead to a shake-up of the nation’s standardized testing landscape, University of California President Janet Napolitano is recommending the suspension of the SAT and ACT tests as an admissions requirement until 2024 and possible elimination after that — a move that could widen access to a UC education for disadvantaged students.

As everybody knows, University of California campuses are stuffed full of racoon coat-wearing Stutz Bearcat-driving WASP males in plus fours due to how the SAT/ACT tests are biased in favor of them:

For example, almost 20% of UC San Diego undergrads in La Jolla are white.

In a proposal posted Monday, Napolitano is recommending a complex and unusual five-year plan that would make the tests optional for two years and eliminate testing requirements for California students in years three and four. Then, in year five, UC would move toward a standardized assessment developed specifically for the 10-campus system.

Here’s a leaked draft of the upcoming admissions test:

The plan would produce rich data on which students get admitted under each strategy and how they perform in college. 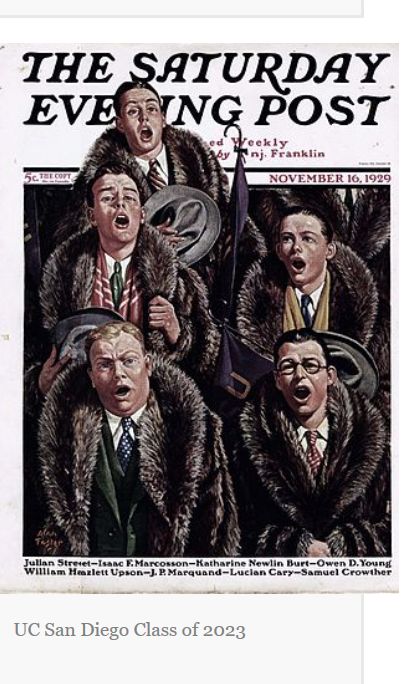 Because nobody has never ever obtained that kind of data before. I’m sure it will prove that white males cheat like crazy on the SAT.

The recommendation is not completely in line with the Academic Senate, which recently voted unanimously to keep the tests for five years while alternatives are researched. But Senate Chair Kum-Kum Bhavnani [actual name] expressed appreciation that Napolitano adopted many key recommendations in a faculty task force report on testing, including development of a new assessment for the UC system.

“The Senate is pleased that the president’s recommendations are in line with the spirit of our recommendations,” Bhavnani said. “We look forward to working with the university to develop a new content-based test.”

Because, no doubt, we are the first organization of nice liberals in academia to ever notice that blacks and Latinos average worse on every single valid selection test ever invented, so creating a new one that is both valid and on which blacks and Latinos score at least as high as cishet white males should be a piece of cake. After all, the academic world is so racist that nobody ever thought of doing this before.

…The six universities that receive the most applications in the nation are UC campuses in Los Angeles, San Diego, Irvine, Berkeley, Santa Barbara and Davis. Last year, the UC system received 215,000 undergraduate applications.

Napolitano has identified standardized testing as a top issue facing the UC system and said regents needed to “get it right” because of the national implications of their action. UC’s decision a half-century ago to require the SAT propelled the test to a place of national prominence, and a move to eliminate the requirement in the early 1990s prompted the College Board to revise the exam to satisfy UC objections about its bias and relevance for admission reviews.

The head of UC decided that analogy questions were racist and that the SAT needed an essay question.

Critics argue that the SAT and ACT are heavily influenced by race, income and education levels of parents; question their value in predicting college success; and express concern about inequitable access to test prep. Those concerns have prompted more than 1,000 colleges and universities to drop the testing requirement. A lawsuit against the UC system also calls for the requirement to be dropped….

Napolitano is proposing that UC experts launch a feasibility study this summer to identify a new test that assesses what the university expects students to master to demonstrate readiness for college. She said UC would consult with K-12 educators, test experts, UC faculty and California State University, which might also use the new assessment.

Because the new test would by put together by Diverse People, it won’t suffer from the Racist Bad Juju of every other test ever invented, which were invented by racist white men.

If no test can be created in time for fall 2025 applicants, use of the SAT and ACT would be eliminated completely for California students.

In its own recommendation for a UC assessment, the faculty task force estimated it could take nine years to develop and some experts have put the potential cost at $100 million.

However, Li Cai, a UCLA statistician, psychologist and testing expert, has said that UC could move more quickly — and share the cost — by marshaling a national coalition to develop a state-of-the art assessment within five years. A new assessment could potentially begin with ninth-graders, he said, analyzing their growth throughout high school, and use newer testing technologies to measure not only academic knowledge, but other valued qualities such as curiosity, resilience and collaborative problem-solving skills.

In fact, Li Cai, being a Person of Diversity, wouldn’t mind heading up this $100 million effort, which, obviously, can’t fail because it’s racist to even imagine that it’s possible under the rules of the universe we inhabit that blacks aren’t as smart as Asians on average.

… Napolitano also asked faculty leaders for additional analysis about the reasons why UC students do not fully reflect the state’s diversity.

It’s almost as if a huge fraction of each UC class consists of high-scoring, full tuition-paying Asian foreign nationals.

In its February review, the task force found that the biggest reasons for the mismatch was not the SAT, but that smaller proportions of disadvantaged students took the full suite of required college preparatory courses and applied to UC.

In what it called surprising findings, the Academic Senate’s review found that the SAT actually helps disadvantaged students gain entry to the selective UC system. That’s because the way UC uses standardized test scores substantially corrects for bias by weighting them less heavily than grades and considering them as only one of 14 factors in a comprehensive review process, the review found.

It’s almost as if the University of California is systematically violating the California constitution as modified by Proposition 209 in 1996.