In the capital of the European Union, Brussels Belgium, the Muslim population (an estimated 25 percent of the city) is is becoming more strongly felt. Immigrant shock troops like Sharia4Belgium have announced their intention to implement Islamic law.

Part of the road-kill on the way to Muslims’ worldwide caliphate is mowing down the traditions of all other religions. So non-Islamic items like Christmas trees are not acceptable, and if the infidels want to maintain an illusion of peace, they must suffer the indignities of increasing acts of appeasement. Today the Muslims are offended by Christmas trees, but there’s an endless supply of ideas that the sensitive Sons of Allah find annoying.

It’s not a small sacrifice for Belgians to trade their beautiful Christmas tree for a meaningless secular replacement. The tree, and accompanying Christmas market near the Town Hall, comprise a popular event for locals and tourists alike. 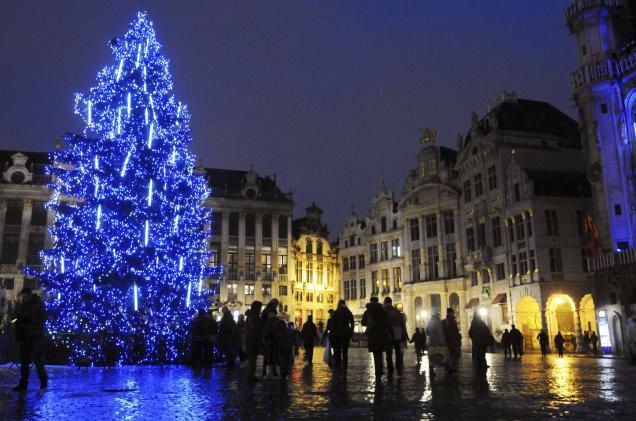 On the other hand, historic Brussels is not what it used to be, given the influx of immigrant diversity. Brussels is now one of the most dangerous cities in Europe, with twice the crime of Frankfurt, according to the TV news clip below. Police cannot control the crime, even during the day, to the point where locals have organized citizens’ patrols to at least keep watch. Expensive shops do not escape violent thieves despite more police. One Belgian observed that crime has gotten a lot worse in the last 10 years. (Video Transcript.)

The traditional Christmas tree will no longer be lit in downtown Brussels.

Government officials in Brussels, Belgium banned Wednesday a popular Christmas tree exhibit out of concerns that the local Muslim population found it “offensive.”

An “electronic winter tree,” will take the place of the traditional Christmas Tree and Nativity scene at the city center of Grand Place, reports Brussels News.

The electronic sculpture will stand 25 meters (82 feet) tall and consists of a set of television screens, reports Brussels Expat. “During the daytime you can climb to the top of the tree where you will be able to enjoy a panoramic view of the city,” the website explains. “As soon as it becomes dark the tree turns into a spectacle of light and sound. Every ten minutes an amazing show will unfold.”

City councilwoman Bianca Debaets believes a “misplaced argument” over religious sensitivities has moved Brussels to put up the light sculpture. She points to the fact that it display not be referred to “Christmas” in any way to make her point.

“I suspect that the reference to the Christian religion was the decisive factor” in replacing the tree, she told reporters. ”For a lot of people who are not Christians, the tree there is offensive to them.”

Many cities in Belgium have thriving Muslim populations. A 2008 study showed Muslims make up 25.5-percent of the population of Brussels, 3.9-percent of Flanders, and 4.0-percent of Wallonia.

Two Muslims elected to the Brussels city council last month have vowed to turn Belgium into a Muslim state based on Sharia law, as previously reported.

Other city officials insists the move was not made to placate Muslims or other groups. Nicolas Dassonville, spokesman for Mayor Thielemans (PS), said the Nativity scene will remain at Grand Place.

The tree’s sponsor, electricity generator Electrabel, made the move to put up the electronic sculpture this year, Dassonville said.