New York resident and writer Daniel Greenfield (aka Sultan Knish) has written about how Brooklyn has changed from a working class American town into a place where Islam’s supremacists have their own neighborhoods. The place is so insular that the ability to speak English is no longer needed to get by.

According to multiculturalists, such balkanized communities existing within the United States are the diversity ideal, with no annoying assimilation to American values!

Below, a Muslim street in Brooklyn where there are no women or girls to be seen. 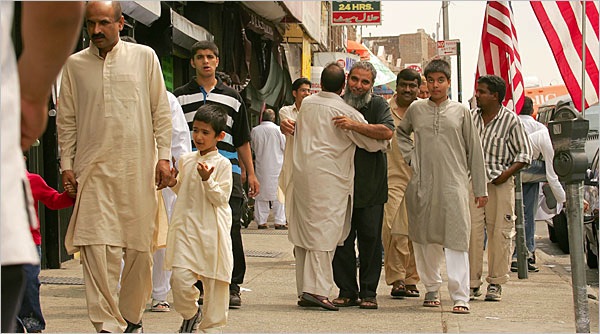 As a starting point, Greenfield uses the recent throat-slice murder of a successful Bangladeshi immigrant by a young tenant, a new immigrant (Tenant nearly beheaded Brooklyn landlord who had ‘humiliated’ him for being short on cash). Do the newbies arrive with unrealistic expectations of immediate success and riches, then become angry when they realize work is involved? The accused killer, Mohammed Siddiquee, had robbed the victim’s safe of $20,000 and was about to board a plane to Kuwait when police arrested him.

Many Muslims don’t deal well with the normal stress of immigration, in part because their attitude of Islamic superiority makes them inflexible to an extreme degree. As Greenfield observes, Islam’s “immigration is also a Jihad, a form of supremacist manifest destiny to colonize” so when bumps along the road occur for individual Muslims, they may become homicidally infuriated when thwarted.

Walk along Church Avenue and turn east onto McDonald Avenue and you will see where the old standards of working class Brooklyn, aging homes with faded American flags and loose siding, surly bars tucked into the shadows of street corners and the last video stores hanging on to a dying industry give way to mosques and grocery stores selling goat meat.

Mosques grow like mushrooms in basements, cell phone stores offer easy ways to wire money back to Bangladesh and old men glare at interlopers, especially if they are infidel women.

This is where Mohammed Siddiquee settled a dispute the old-fashioned way by beheading his landlord.

Mohammed wasn’t the first man in Brooklyn to use violence to settle a rental dispute, but beheadings are more traditional in his native Bangladesh than in Brooklyn, though over in neighboring Queens, Ashrafuzzaman Khan, Bangladesh’s most wanted war criminal, heads up the local Islamic Circle of North America, whose Islamist thugs beheaded poets and buried professors in mass graves.

Here in Kensington, where the alphabet streets that march across Brooklyn down to the ocean begin, the bars retreat along with the alphabet from those areas marked by the crescent and the angry glare. And there is another one like it at the other end of the alphabet where the Atlantic Ocean terminates the letters at Avenue Z bookending the Brooklyn alphabet with angry old men and phone cards for Bangladesh.

These spots aren’t no-go zones yet. There aren’t enough young men with too much welfare and time on their hands who have learned that the police will back off when they burn enough things and councilmen will visit to get their side of the story. That generation will grow up being neither one thing nor the other, ricocheting from American pop culture to the Koran, from parties with the infidels to mosque study sessions until they explode from the contradictions the way that the Tsarnaevs, who huffed pot and the Koran in equal proportions, did.

It isn’t the old men who plant bombs near 8-year-olds. It isn’t the young women laughing with their friends outside a pizza parlor, knowing that in a year or two they will have to go back home for an arranged marriage. It is the young men who call themselves Freddy or Mo at the local high school or community college, who drink and do drugs and who all their American friends swear aren’t serious about religion, until they suddenly become fatally serious.

For now the Bangladeshi settlements in Brooklyn are quiet places where the tenements and shops close off the streets into small private worlds with their own justice systems, feuds and secrets.

“I feel like I’m living in my own country,” the editor of one of the Bangladeshi newspapers in New York, said. “You don’t have to learn English to live here. That’s a great thing!”

Overhead may be the same sky, but Little Bangladesh has been cut off from Brooklyn and attached to a country thousands of miles away. Immigrants step off a plane from Bangladesh at JFK airport, get into a taxi driven by a Bangladeshi playing Bengali pop tapes and step out into a small slice of Bangladesh on McDonald Avenue.

And when the infidels of Brooklyn wander into their territory, they are glared at as the foreign intruders that they are.

After Mohammed beheaded his landlord Mahmud, he rushed to JFK to catch a flight. It was natural for him to think that having settled matters in the traditional fashion; he could fly away without considering what lay in the intervening spaces of the American Dar al-Harb between the Dar al-Islam of Avenue C and the Dar al-Islam of Bangladesh.

For the Mohammeds of Brooklyn, the infidels are the empty air between the rungs of a ladder that their foot passes through without noticing. They are little aware of the other Brooklyn that they are pushing aside, the great stretches of the working middle class, the little homes where police officers and firefighters once lived together with teachers and clerks, where plumbers walked to work and bus drivers got on, where the thousands of small businesses from diners to pharmacies turned the grassy stretches of land into neighborhoods.

Bugs Bunny was born here with his Flatbush accent along with a million real workers, soldiers, sailors, inventors, engineers, bums and salesmen who won wars, broke cases, sobbed in bars and brought dinner home to their families. And now, like so much of the urban working class, they are being swept away by time and tide, not from the familiar shores of Coney Island, but by the murkier waters of the Karnaphuli River and the strange world that its tides bring to Brooklyn.

The city has always had its micro communities; Chinatown at the bottom of Manhattan and Little Tokyo near NYU, Little Brazil off Times Square and Koreatown a block up from the Empire State Building. The Russians have their stretch of Brighton Beach with its tea rooms and fur coats and Little Italy’s butcher shops, bakeries and rows of restaurants are still hanging on.

But Islam is not just a culture and the cultures who carry its baggage with them to the old worlds and the new are not toting it along like another ethnic food, a dialect or a national holiday.

In Chinatown, Buddhist temples and protestant churches sit side by side and in Latino neighborhoods, Adventist storefront churches and massive Catholic edifices co-exist; along with them can be found synagogues, Hindu and Zoroastrian temples and the whole dizzying array of religious diversity of a port city defined by its swells and tides of immigrants.

Bangladesh is more than 90 percent Muslim. Hindus are being attacked in the streets of its cities by Islamist mobs because Islam does not co-exist. The other religions of the city do not demand that everyone join them or acknowledge their supremacy and pay them protection money for the right to exist.

Its immigration is also a Jihad, a form of supremacist manifest destiny to colonize the Dar al-Harb and subdue it to the will of a dead prophet with sheer numbers or sheer force.

The number of Bangladeshis in New York has increased by 20 percent in only four years to an estimated 74,000. And those numbers don’t take into account the unofficial Mohammeds living in basements while nursing their murderous grudges.

Jamaica, Queens is becoming the center of the Bangladeshi presence in New York. Another Mohammed, Quazi Mohammad Rezwanul Ahsan Nafis, lived here in a low rise development of indistinguishable buildings crammed together and studded with satellite dishes so the dwellers could watch the television programs of their home countries, and plotted the mass murder of Americans.

“We will not stop until we attain victory or martyrdom,” he said in a video recorded before his planned attack. His modest goal, in his own words, was to “destroy America” and quoted “Sheikh Osama” to justify the killing of American women and children.

Mohammed described the United States as the Dar al-Harb, the realm of war, the territory yet to be conquered by the armies of Islam, and said that the only permissible reason for a Muslim to move to the United States was to conquer it by missionary work or by armed terror.

“I just want something big. Something very big,” Mohammed said, “make one step ahead, for the Muslims . . . that will make us one step closer to run the whole world.”

At this hour no one in Little Korea, Little Italy, Little Brazil, Brighton Beach or Koreatown is plotting to destroy America so that his religion can rule the world. That is what sets the Little Bangladeshes, Little Pakistans, Little Mogadishus and Little Egypts apart from every other immigrant group whose dreams for the future are not overshadowed by the iron dream of Islam.