Peter Brimelow told me that the headline said "Brooklyn Men" had been charged with plotting to join ISIS, even though the men were actually Muslims from Central Asia.

At the moment, if you Google "Brooklyn Men" you get nothing on the first page but these guys, from the NYT, USA TODAY, and the WSJ. 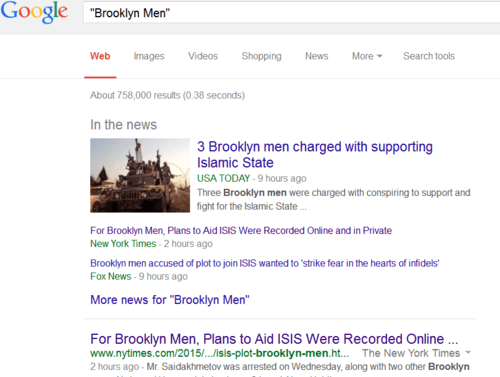 At one point, Mr. Saidakhmetov, despairing that he might not be able to get his passport back from his mother, spoke about joining the army so he could help gather information for the Islamic State. If that failed, he could just shoot other soldiers, he said in a conversation recorded by federal agents.

At Wednesday’s arraignments, Mr. Juraboev and Mr. Saidakhmetov looked remarkably young as they were led into the courtroom.

Mr. Juraboev, a citizen of Uzbekistan, and Mr. Saidakhmetov, a citizen of Kazakhstan, had been living in the United States for several years, and both had permanent resident status.

So what these people are is immigrants. Specifically, Muslim immigrants. And "immigrant" the word that newspaper style always avoids in these cases.

Instead of "citizen of Kazakhstan" or "citizen of Uzbekistan", the NYT, if they were normal humans, could have written "immigrant from". They could have said that they "immigrated to" rather than "had been living in" the United States.

But apparently it would burn their fingers to type those words.

By the way, no matter how "remarkably young" they look, they're dangerous, especially if they had been allowed to join the Army.