Unwise immigration over decades has made Britain a more dangerous place, where thousands of Muslims constitute a fifth column dedicated to destroying the society using violence. In 2005, Sons of Allah bombed the London transit system, an attack which killed 56 including four bombers and injured about 700. Various plots have been disrupted by the police, but the hostile Muslims keep plugging away.

Today's example of diversity against public safety is the threat of a terrorist attack against the royal wedding of Prince William and Kate MIddleton. 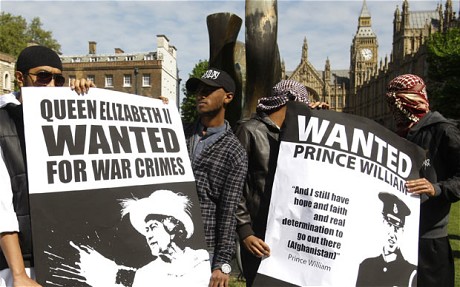 Muslims Against Crusades, which had its application to protest on Friday turned down by police, yesterday urged Muslims to stay away from central London when Prince William marries Kate Middleton and to avoid all means of public transport due to the heightened risk of an attack.

Assad Ullah, leader of the extremist campaign group, insisted that it had no "inside knowledge" but was simply repeating security fears that have already been widely reported.

"There is a legitimate Islam opinion that those who have been attacked have the right to retaliate," he said.

"British foreign policy is causing this kind of feeling and increasing the instability in this country. We do not advocate violence but can see how they made themselves a legitimate target for others."

Announcing that the group had abandoned its plans to protest against the wedding, group spokesman Abu Abbas said: "We urge all Muslims to stay away from the royal wedding, not only because of the drinking, drug taking and sexual promiscuity but because of the likelihood of an attack by the Mujahideen.

"We urge all Muslims to stay away from public places and all public transport, trains, buses and tubes around central London."

The group, which was founded last year after the radical group Islam4UK was banned, was heckled and police forced to intervene as Abbas criticised British policy outside Parliament in Westminster against a backdrop of banners, one reading: "Wanted: Prince William... Modern Day Nazi.".

Abbas said: "The killing of Muslims, the raping of Muslim women and the imprisonment of Muslims are increasing the instability in this country.

"We will not be participating and demonstrating, we are withdrawing our souls due to the risk of an attack. We believe it is highly likely, it is a prime target.

"Many people feel that they have been oppressed and have a score to settle with the Royal Family. We can see why they see them as a legitimate target."

As the group accused the Royal Family of being responsible for war crimes, onlookers shouted: "You're all on benefits anyway" and "Long live the Queen".

One of the Muslims retorted: "You paid for this camera, you pay for my benefits, you're basically my slave."

The hardline group, which earned notoriety last year when protesters gathered in London to burn poppies on Armistice Day, said that it had decided to issue the warning after advice from its teacher Sheikh Omar Bakri who has issued a Fatwa against the wedding

Earlier this month firebrand cleric Anjem Choudary also told Muslims to avoid Westminster Abbey. He said: "If my brothers decide to use the opportunity when the world is looking at the Royal Family to pass a message so that we can avoid more deaths of innocent men, women and children in Afghanistan, that should be applauded."

Around 5,000 police officers will be joined by many more undercover and hundreds of soldiers in uniform in Westminster on the wedding day.

Assistant Commissioner Lynne Owens said: "Any criminals attempting to disrupt the day, in protest or otherwise will be met by a robust, decisive, flexible and proportionate police response.

"We want the public to be our eyes and ears and report anything suspicious or unusual."