David Blunkett has observed that the EU-mandated opening of Britain to the 29 million people of Bulgaria and Romania in a couple months may cause a violent reaction among the citizens.

Blunkett complained rather weakly about the backward behavior of Roma persons, and urged them to stop littering. He practically called Roma children feral, referring to them as “living in the edge of woods, not going to school.” Nevertheless he stressed that British people should accept still more unwanted immigrants, even though an October poll revealed that two-thirds of respondents said they wanted drastic action to reduce immigration.

Perhaps Blunkett had read the recent Daily Mail article in which the mayor of two dirt-poor Romanian villages opined that up to half of local residents would move to the UK when the border opens next year. “In January, the only thing left will be the goat,” he said.

Below, a Roma encampment in France. 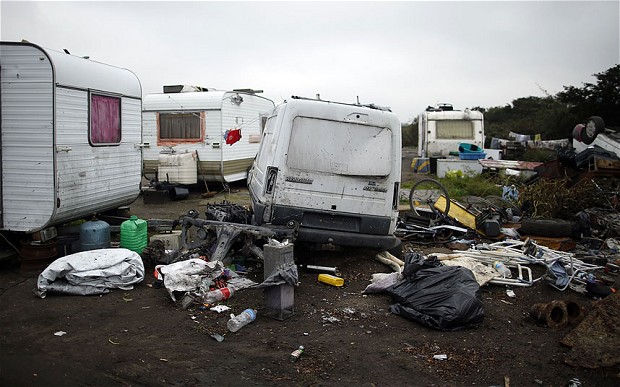 Britain has already been battered by its increasingly hostile Muslim population. Earlier this month, the head of MI5 announced that authorities had thwarted 34 terror plots since the 7/7 London attacks of 2005 in which jihadist suicide bombers killed 52. The 2012 Olympics in Islamized London cost $2 billion for security.

Now the Roma are coming. They are known for thievery, begging behavior and general sloth. One measure of Roma offensiveness: Britain-residing Pakistanis are patrolling the streets to teach proper English behavior.

It has been estimated that 70,000 newbies will come annually when the doors to Romania and Bulgaria open, but that number may be overly conservative.

The former Home Secretary is concerned that racial tensions could lead to rioting like that seen in the North of England in 2001.

In an interview with BBC Radio, he urged Roma from Slovakia to “change their culture”, saying their children needed to be sent to school, they need to stop dumping their rubbish and avoid loitering in the street.

Without such changes, communities could ‘explode’, leading to riots on a similar scale to those in Bradford, Oldham and Burnley.

“If everything exploded, if things went wrong, the community would obviously be devastated,” he said.

“We saw this is Bradford, Burnley and Oldham all those years ago when I first became Home Secretary. If things implode it’s not outside here that cops it, it’s the community.”

The 2001 riots were sparked by clashes between Asian communities and far-Right groups such as the National Front and British National Party. Over 200 people were jailed as a result.

Mr Blunkett admitted that indigenous locals should be careful not to “stir up hate”, but said that they were entitled to “grumble” about the migrants appearing in their areas.

“I wouldn’t want other people to put up with things I wouldn’t put up with myself,” he said. “This is nothing to do with criticising people about being racist. By all means grumble, but don’t stir up hate. If you set a fire alight, you came from Bradford, you saw it – nobody gained from that.”

He added: “There’s always a danger that you are right on the edge of the understandable tensions. It’s a cry for help from very, many people: ‘please, for goodness sake, put us back to the semblance we had before’.”

The Labour MP believes that the cultural divide between the Roma and indigenous community was far greater than that between white Britons and Pakistani immigrants.

“The Roma youngsters have come from a background even more different culturally, because they were living in the edge of woods, not going to school, not used to the norms of everyday life. We’ve got to change that,” he said.

He went on to criticise the current Government for failing to properly address the issue, saying that it has its “head in the sand” about the true number of Roma migrants living in the UK.

While official estimates in 2011 suggested that ‘relatively few’ Roma had made their home here, recent research suggests that the figure could in fact exceed 200,000.

In January, when migration restrictions will be relaxed, Romanian and Bulgarian people will be free to live and work in Britain and there are concerns that the ‘tensions’ mentioned by Mr Blunkett will only continue to rise.