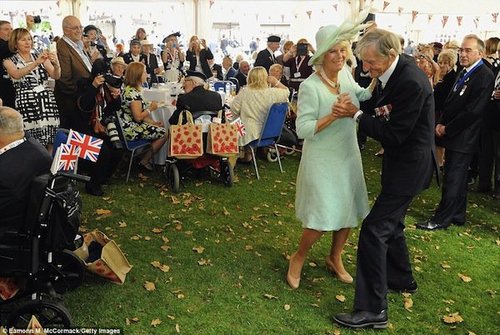 Above, Camilla, the Duchess of Cornwall, danced with a WWII veteran, navy sailor Jim Booth, 94, during a celebration of VJ Day in London.

How disconnected has the West gotten from the basics of survival? Indications are discouraging. One example is the remembrance of the WWII victory this week while at the same time a future conflict is being created by Europe’s stupid opening its borders to many thousands of likely enemies.

Meanwhile, on the other end of Europe, an invasion is occurring because the political leaders of the EU are too politically correct to block the entrance of historic enemies. Impoverished Greece has borne a lot of the brunt this year, focused on its island of Kos located just three miles from Turkey, which is happy to wave through the thousands of illegal aliens to make them Europe’s problem.

Greece is struggling just to process the thousands of demanding foreigners who want to get on to Britain which reputedly has the most generous benefits for moochers. The crowd below is waiting to take a ferry from Kos to Athens so they can be on their way to better pickings in the UK. 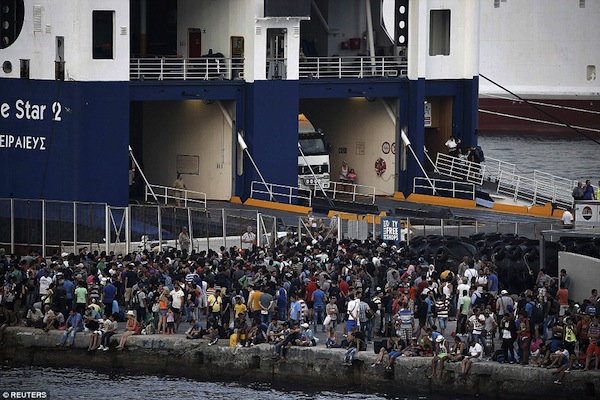 The video clip below says 140,000 migrants have arrived in Greece so far this year. Many more illegal aliens are taking the Mediterranean route from north Africa to Italy. One estimate is that a total of 250,000 have entered Europe this year. That’s a lot of future trouble that never had to happen.

Many of the incoming Muslims will find that European streets are not paved in gold, nor are there well paying jobs for them because unemployment is a problem on the continent already. Many will hang out at the local mosque which likely preaches jihad against the hated infidel Europeans. Violent conflict is practically guaranteed because of the idiot policy of opening Europe’s borders to one and all — particularly to Muslims who are enemies of 1400 years standing.

In WWII, the West fought against totalitarians; today it welcomes them out of liberal naivete — apparently the idea of having “enemies” is too politically incorrect to accept. In the 1940’s, Britain had Churchill as a war leader who declared, “We shall never surrender.” Last year, Paul Weston was arrested for quoting Churchill about Islam — the current threat — in public.

In a hint of what monsters Europe has welcomed, the sub-tribes of Islam recently rioted among themselves on Kos, chanting “Afghanistan!”, “Pakistan!” and “Iran!” just like the gangsters they are.

Migrants desperate to get off the Greek island of Kos fought each other on Saturday while nearby a passenger ship chartered to house and process refugees lay empty 24 hours after it had arrived.

Outside the island’s main police station, about 50 migrants from Afghanistan, Pakistan andIran threw stones and exchanged blows as tempers boiled over in the intense mid-summer heat. Riot police stood by without intervening.

The migrants have little chance of getting aboard the ship, the Eleftherios Venizelos, as priority is being given to Syrians, who are treated as refugees as they are fleeing their country’s civil war and have greater rights under international law than economic migrants.

All have crossed the narrow stretch of water from Turkey in small boats and dinghies as they try to find a better life in Europe and leave behind either conflict or poverty.

A few hundred meters from the Kos police station, the white-painted ANEK Lines vessel remained at a quayside with only its crew aboard a day after it had docked while Greek officials debated among themselves how the Syrians should be let aboard.

Nearly a quarter of a million migrants have crossed the Mediterranean to Europe this year, according to the International Organisation for Migration. Of these, about half have come to the Greek islands, with numbers surging in the summer when calmer weather makes the crossing marginally less risky.

Early on Saturday, about 300 Syrians had gathered on the quayside in the hope of getting aboard the ship – a car ferry belonging to ANEK Lines which operates routes to the Greek islands and across the Adriatic to Italy – where about 2,500 people are due to be housed and processed.

The Greek government chartered the vessel to ease conditions on Kos, where several thousand migrants are staying in hotels if they can afford it, or more often sleeping in tents or the open.

However, as hopes of a swift embarkation faded, the Syrians retreated from the quayside to find shade in the midday heat.

Officials from the local administration, police and Greek coast guard were discussing what to do.

“It’s a team operation to find the safest solution and to gather the migrants safely. There are a great number of people,” a coast guard official said, speaking on condition of anonymity. The official did not know when embarkation would start.

A few hundred Asian migrants were at the police station when the brawling began, hoping to register and obtain papers which will allow them to stay temporarily in Greece. They then want to head for the mainland in the hope of finding a route to northern Europe, where more support and jobs are available than in Greece, which is in the grip of an economic crisis.

The police station was closed off on Saturday, a religious festival in Greece, but some migrants still thought those from other countries might get preferential treatment.

To rival chants of “Afghanistan!”, “Pakistan!” and “Iran!”, fists and stones flew. At least one man was kicked on the ground, while others wandered around with blood on their faces.

Other members of the crowd moved in to cool tempers and calm returned after several minutes of disorder. Riot police, drafted in earlier this week from the mainland to reinforce local officers on the normally tranquil holiday island, watched from the sidelines.

“We didn’t intervene because our priority is to protect the police station,” one riot policeman told Reuters.

Later, a group of Iranians tried to break the police line blocking access to the police station. The riot police beat back the crowd with batons during the brief affray.

On Tuesday, local police used fire extinguishers and batons against migrants after violence broke out in a sports stadium where hundreds of people, including young children, were waiting for immigration papers. About 40 riot police were subsequently sent to the island to keep order.

Meanwhile, migrants kept arriving from the Turkish mainland, which lies within sight of Kos.

The coast guard said it had rescued 212 people on the island’s northeastern coast who were in four inflatable dinghies and one speedboat.

As the had no valid travel documents, they were arrested for entering the country illegally and taken for questioning.

Just after dawn on Saturday, Reuters witnesses saw three dinghies each carrying around 30 to 50 people, mainly families from Syria and Iraq as well as young men, coming ashore.

Later, six men, a woman and a baby from Iran arrived, some crying and nearly fainting, after a 3-1/2 hour journey from Turkey. In the distance was another boat with about 10 men paddling with one oar and their hands.