For the not-all-diversity-is equal file. Corruption exists in all societies, but in some it rises to the level of a cultural norm. One measure: the Corruption Index provides an annual list of nations and how dishonest each is judged to be. Out of 176 countries scored in 2012, Pakistan was rated at #139, near Nigeria, although not quite as degenerate as rock-bottom Somalia, Afghanistan and North Korea.

When Pakistanis relocate to the West, the lessons they learned growing up in their traditional “favor culture” don’t disappear. One easily measured expression of corruption has been several cases of electoral fraud.

Below, many Muslims residing in Britain have resisted cultural assimilation, as illustrated by the burqa-wearing person using public transit. 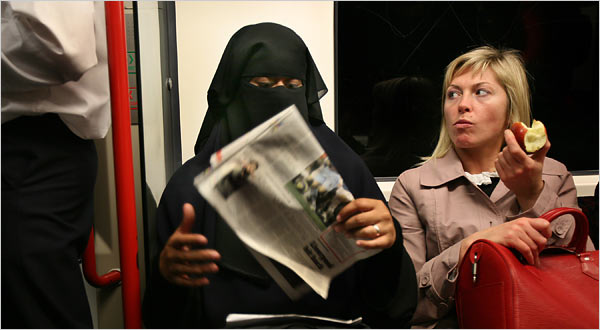 Naturally, Pakistani diversity defenders say their feelings are hurt by such unkind truths. “I’m profoundly disturbed at a statement from such a senior Conservative MP against the British Pakistani community,” Lib Dem Qassim Afzal responded on BBC Radio.

The population of Pakistanis residing in Britain numbers at least 1.2 million.

Corruption in parts of the Pakistani community is “endemic” and a growing problem that politicians have underestimated, the Government’s chief legal adviser has said.

Dominic Grieve QC, the Attorney General, said ministers should “wake up” to the threat of corruption in public life, which he attributed to “minority communities” that operate a “favour culture”.

In an interview with The Daily Telegraph, Mr Grieve praised the integration of minorities into British life, and pointed out that corruption can also be found in the “white Anglo-Saxon” community. But he said that the growth of corruption was “because we have minority communities in this country which come from backgrounds where corruption is endemic. It is something we as politicians have to wake to up to”.

Mr Grieve said he was referring to “mainly the Pakistani community” but added that other minority communities had similar problems.

His remarks could affect Britain’s relations with Pakistan. In 2010 David Cameron refused to apologise after he accused the country of “exporting terror”.

Ministers are aware that high-profile stories involving child abuse, Islamist extremism, slavery and corruption in the Pakistani community are being used by far-Right agitators such as the English Defence League to stir sectarianism.

Mr Grieve, the MP for Beaconsfield in Buckinghamshire, has a sizeable South Asian community in his constituency. “I can see many of them have come because of the opportunities that they get. But they also come from societies where they have been brought up to believe you can only get certain things through a favour culture,” he said. “One of the things you have to make absolutely clear is that that is not the case and it’s not acceptable.”

He said electoral corruption in particular had increased. He identified Slough, Berks, as an example of where abuses had occurred. In 2008 a Tory councillor, Eshaq Khan, was found guilty of fraud involving postal ballots. Earlier this year the Electoral Commission announced it was considering introducing ballot box identity checks in Tower Hamlets, east London, in an effort to stamp out electoral fraud in areas with large South Asian communities.

Asked if he was referring to the Pakistani community, Mr Grieve said: “Yes, it’s mainly the Pakistani community, not the Indian community. I wouldn’t draw it down to one. I’d be wary of saying it’s just a Pakistani problem.” He added: “I happen to be very optimistic about the future of the UK. We have managed integration of minority communities better than most countries in Europe.”

Tory ministers have avoided singling out particular communities over political corruption. However, in 2010, Baroness Warsi claimed the Tories lost three seats at the general election as a result of voter fraud within the Asian community.

Mr Grieve also said the Government was considering how to deal with the expected influx of Bulgarian and Romanian migrants when movement controls are lifted in January. He acknowledged that “the volume if immigrants may pose serious infrastructure issues”.