Among the various end-of-year enumerations, one of Obama’s many falsehoods was notable: his “record deportations” turned out to be as big a whopper as ObamaCare’s “You can keep your doctor.”

Is el Presidente even deporting rapists, murderers and child abusers after prison? It doesn’t sound that way. Only a tiny handful of foreign intruders are being repatriated.

Fewer than 0.2 percent of the 11.7 million illegal aliens in the United States were deported in 2012 for violating immigration laws, according to data released by the U.S. Immigration and Customs Enforcement agency.

“It is a drop in the bucket,” Jessica Vaughan, director of policy studies at the Center for Immigration Studies, told The Daily Caller. “Relative to the [agency] resources and tools they have been given to do this job, it is a record low,” said Vaughan.

Government officials say they deported a total of 368,644 people. But almost two-thirds of those people, or 235,093, were caught at the border and promptly returned to their home countries.

Only 133,551 resident illegals were picked up in the interior of the country and deported, the ICE report admitted.

But 82 percent of those residents were deported for other offenses, ICE acknowledged. Those offenses include drunk driving, assault, robbery and drug possession.

The remaining 18 percent adds up to only 20,000 illegals of the 11.7 million illegals believed to be living in the United States.

That’s only one immigration-law deportation for every 585 illegals. [. . .]

Meanwhile, liberal propaganda organs continue to pump out emotional tripe based upon the self-created problems of lawbreaking foreigners.

The Washington Post published one such item on Sunday about a family with an illegal alien dad who might get the hook. It reminded me of the dog-and-pony show I saw when Congressman Luis Gutierrez brought his magical amnesty tour to San Francisco in 2009: Treason Lobby Triumphant: Speaker Pelosi Boards Gutierrez Amnesty Express.

The opening act was a nine-year-old boy who complained of living in fear because his father might someday be caught and deported. The office janitor dad wasn’t in jail or especially in danger because of American immigration laws, but just the slight possibility of deportation was considered a cruelty worthy of sympathy by the largely hispanic audience.

The Washington Post found a similar worried little boy in order to purvey its sob story:

Below, illegal alien Jorge Penate resides in Virginia with his wife Diane and son Jason. 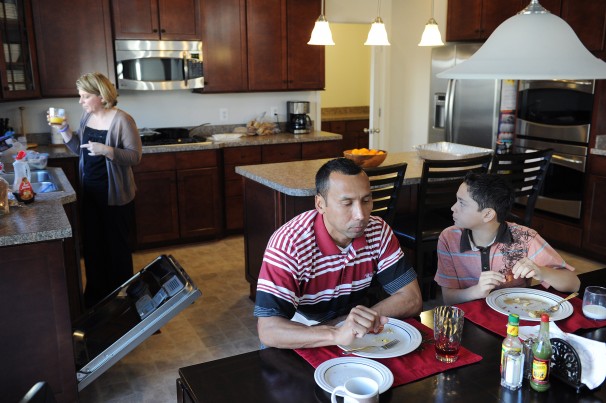 It’s too bad for the kid. It’s tough being 12 and knowing your father might be sent back to Guatemala — although a deportation is unlikely after all this sympathetic publicity.

On the other hand, 2.7 million American kids have a parent in jail caused by deliberate lawbreaking and nobody writes sensitive newspaper stories about their emotional suffering.

Deportations of parents can cast the lives of U.S.-citizen kids into turmoil, Washington Post, December 29, 2013

Twelve-year-old Jason Penate spent the holidays hanging close by his father. They picked out a Christmas tree and decorated the front window of their Gainesville, Va., home with candy canes, and Jason tried very hard not to think about whether his father would still be here in the new year.

Jorge Penate, a Guatemalan national who came to the United States illegally in 1997, has a hearing scheduled Monday that will determine whether he can stay in the country. A drunken driving arrest two years ago launched deportation proceedings and cast his family’s future into uncertainty.

Jason wrote a letter to the immigration judge, explaining that the three days his father was detained in 2011 “were the worst days of my life” and asking not to be separated from him again. “If he does have to leave I think every day of my life is going to be the worst,” Jason wrote.

More than 1 million illegal immigrants were deported in the past three years, a record number reflecting increased enforcement efforts under the Obama administration. The crackdown has spun the lives of hundreds of thousands of U.S. citizens — including children like Jason — into upheaval.

In fiscal 2012, an estimated 150,000 U.S.-citizen children had a parent deported, according to a study by Human Impact Partners, a health advocacy group.

Concerns about the fate of these children are adding an emotional pitch to the call for comprehensive immigration reform. Advocates are urging Congress to create a path to citizenship for undocumented immigrants, allowing divided families to be reunited and preventing children from having to live with the daily fear that they could lose their parents.

Young people are themselves calling for change. This month, more than a dozen children and teenagers delivered thousands of letters to members of Congress from children whose lives have been — or could be — upended by deportation. Some spoke at a news conference, their faces barely visible over the lectern.

“What if immigration broke up your family? Would you like it?” asked 11-year old Charlie Hoz-Pena, a U.S. citizen from Homestead, Fla., whose father was deported to Mexico last year.

Emboldened by President Obama’s authorization of temporary legal status for young undocumented immigrants, many of these “Dreamers” are now saying they can’t be satisfied without a more secure future for their parents, too.

The president’s program “should not just be for students, it should be for families — to stop this pain,” said Hareth Andrade-Ayala, 20, an Arlington County resident who secured a work permit through the Deferred Action for Childhood Arrivals program in 2012. Now she is organizing a campaign to prevent her father’s deportation.

Those who oppose amnesty for illegal immigrants say these are the consequences of illegal activity. Ira Mehlman, spokesman for the Federation for American Immigration Reform, said that committing any kind of crime has ramifications for families and that immigration violations should not be exceptions.

“Children should not be used as human shields,” Mehlman said. “Just because you have kids does not mean that they should shield you from the consequences of your own actions, which is knowingly violating the laws of the United States.”

Immigration officers have discretion to show leniency to law-abiding people who have been in the country a long time and are raising children who are citizens. In August, the acting director of Immigration and Customs Enforcement issued a “parental interest directive” to help manage cases involving detained parents and to clarify when officers may, on a case-by-case basis, seek alternatives to detention, with children’s welfare in mind.

“ICE is focused on smart, effective immigration enforcement that prioritizes the removal of criminal aliens, recent border crossers and egregious immigration law violators, such as those who have been previously removed from the United States,” said Nicole Navas, an ICE spokeswoman.

The deportations have a ripple effect, advocates say. A 2010 Urban Institute study looked at the consequences of parent arrest, detention and deportation on nearly 200 children from 85 families in six locations. Most families lost a working parent, and housing instability and food insecurity were prevalent. About two-thirds of the children experienced changes in their eating and sleeping habits in the months afterward. More than half said they cried a lot and were more fearful. A third showed more anger or aggression.

Most deported parents leave their children in the United States with a spouse or another caregiver. About 5,100 children are in the foster care system at any given time, according to an estimate by the Applied Research Center, which advocates for immigration reform.

“At the end of the day, there’s no good outcome for a kid who has a parent detained or deported,” said Wendy Cervantes, vice president for immigration and child rights policy at First Focus, a children’s advocacy group. “No matter what, you are causing harm to that child and turning their world upside down.”

From the outside, the Penates seem like a lot of their upwardly mobile suburban neighbors. Their lives are built around work, long commutes and their son’s busy soccer schedule.

Dianne Twinam Penate, a U.S.-born citizen, knew that Jorge Penate was undocumented when they fell in love in 2001. But the couple thought his status could change after they married.

They applied for legal residency in 2002, by then parents with a newborn, only to learn that the laws had changed and there was no path to citizenship for someone who had entered illegally, as Jorge had. Back in 1997, he was twice turned away at the border trying to enter from Mexico before he successfully crossed into the United States.

They resolved to make the best life they could. From an entry-level job in commercial real estate, Twinam Penate rose to become a senior vice president of a major company.

Jorge Penate started a home-maintenance business, giving him the flexibility to be Jason’s primary caregiver. He’s the one who wakes with his son, makes sure he’s dressed and ready for school, walks him to the bus stop and helps him with his homework. Jason is a nearly straight-A student in a gifted program at school.

But all their forward momentum lurched to a stop when Penate was arrested for misdemeanor drunken driving in November 2011. Police determined he had a blood-alcohol content of 0.08, the legal limit in Virginia. Authorities checked his immigration status against an FBI database, and he was transferred to ICE custody.

He said he understands the potential consequences of drinking and driving and called the arrest “the biggest mistake of my life.” But, he wrote to the court, he hopes the one-time lapse in judgment does not result in permanently tearing his family apart. In the months that followed, Penate pleaded guilty to a lesser reckless-driving charge and lost his license, making it more difficult to work. An immigration hearing was set.

The family talks about the possibility of moving to Guatemala together if Penate has to leave, but they worry about the violence and the uncertainty of finding work or good schools.

They hired a lawyer and solicited 60 letters of support from neighbors, co-workers and friends. They also launched an online petition, which has more than 1,000 signatures.

Twinam Penate said she and her husband have always tried to make the best life possible for their son. She now dreads that her husband might have to leave and the effect it would have on her son.

“I’m just worried that he would never recover,” she said.

Postscript: as expected (by me), the judge dropped the deport case: Guatemalan national with U.S. family can stay in country (Dec. 31).