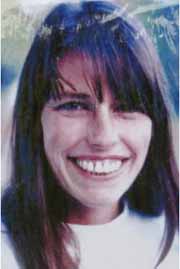 In any normal case in Texas of a man who had murdered a mother while carjacking her vehicle, the sentence would have been a slam-dunk trip to the executioner. But since killer Timoteo Rios escaped to his native Mexico, the Mexican government required a promise of no capital punishment in order to allow the perp’s extradition.

So the jury quickly found him guilty of capital murder and the sentence was an automatic life in prison.

The Houston murder got a lot of attention in 2008 because the victim, Tina Davila (pictured), was the mother of five who was protecting her baby in a carseat from being taken along with the SUV.

The killer had been arrested earlier for another offense but was not deported by the sanctuary city, leaving him free to commit more crimes. See “Why’d They Let Him Go?” Previously Arrested Illegal Alien Kills Woman In Carjacking Attempt.

A jury on Thursday took only an hour to convict Timoteo Rios of capital murder in the stabbing death of a woman protecting her 4-month-old baby from a would-be carjacker.

The April 2008 incident, including Tina Davila’s struggle with a man over her car keys and her collapse inside a cellphone store in east Houston, was captured on surveillance video that was presented during opening arguments in the two-day trial.

Rios, a 26-year-old Mexican national who has lived in the U.S. since he was 2, received an automatic sentence of life in prison without parole.

Davila’s older daughter, 20-year-old Patricia Matt, said the sentence was a good outcome since Rios was not eligible for the death penalty.

“Now we move on with our lives,” Matt, a nursing student at San Jacinto College, said outside the courtroom.

About a month after the killing, Rios fled by car to the Mexican state of Michoacan, where he was taken into custody in August 2009.

Car keys demanded
The agreement for his extradition specified that Rios would not be sentenced to death.

He was returned to Texas in December 2010.

As she got out of her white Chrysler Aspen sport utility vehicle, Rios approached her from a nearby Ford Taurus driven by another man and demanded her car keys.

The 39-year-old mother of five resisted, telling him her baby was in the back seat, prosecutor Tina Ansari said.

The two struggled and Rios got the keys, but as Davila continued screaming, “My baby,” he flung them back at her, according to eyewitnesses who testified at the trial.

During the struggle, Rios stabbed Davila in the heart with a 3-inch flip knife, Ansari said.

Testifying Thursday, he said he didn’t intend to kill Davila.

“I was just trying to scare her by swinging the knife,” he said. “I’m sorry. I never meant to hurt nobody.”

‘I was buzzing’
Rios also said he had drunk six to 12 beers and had smoked marijuana that day.

Ansari scoffed at Rios’ suggestion that drinking had affected his judgment.

“You were used to drinking daily, and that day was no different from others,” Ansari said. “You were aware enough to spot a nice car, weren’t you? You didn’t stumble around. Don’t blame it on alcohol. You knew what you wanted.”

In closing arguments, Ansari told the jury that Rios’ intent was evident in the force of the knife wound, which penetrated a rib to reach Davila’s heart.

Allen Tanner, Rios’ attorney, said outside the courtroom that his client had become religious since his arrest in Mexico, and he believed him when he said he didn’t intend to kill anyone.

“That’s why he took the stand,” Tanner said. “He wanted to tell his version.”

Tanner said the outcome is sad for everyone involved.

“I think the victim in this case really had a lot to do with the verdict,” Tanner said. “She was trying to save her child from being carjacked.”