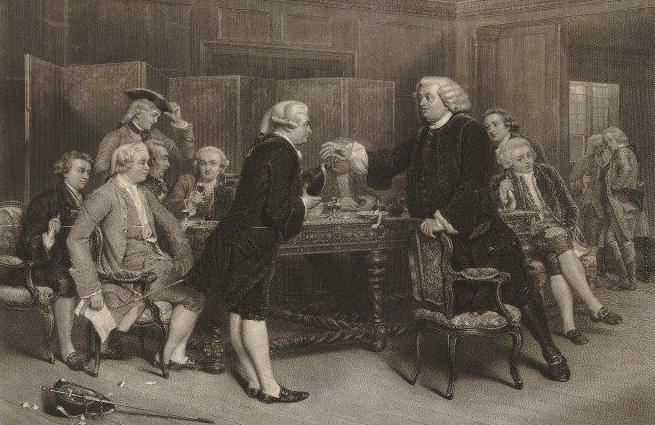 Boswell And Johnson: 250 Years Ago Today

Today is Boswell-Johnson Day.  It was 250 years ago today that James Boswell first met his intellectual hero.

Mr. Thomas Davies the actor, who then kept a bookseller's shop in Russel-street, Covent-garden, told me that Johnson was very much his friend, and came frequently to his house, where he more than once invited me to meet him; but by some unlucky accident or other he was prevented from coming to us.

Mr. Thomas Davies was a man of good understanding and talents, with the advantage of a liberal education. Though somewhat pompous, he was an entertaining companion; and his literary performances have no inconsiderable share of merit. He was a friendly and very hospitable man. Both he and his wife, (who has been celebrated for her beauty,) though upon the stage for many years, maintained an uniform decency of character; and Johnson esteemed them, and lived in as easy an intimacy with them, as with any family which he used to visit. Mr. Davies recollected several of Johnson's remarkable sayings, and was one of the best of the many imitators of his voice and manner, while relating them. He increased my impatience more and more to see the extraordinary man whose works I highly valued, and whose conversation was reported to be so peculiarly excellent.

At last, on Monday the 16th of May, when I was sitting in Mr. Davies's back-parlour, after having drunk tea with him and Mrs. Davies, Johnson unexpectedly came into the shop; and Mr. Davies having perceived him through the glass-door in the room in which we were sitting, advancing towards us,—he announced his aweful approach to me, somewhat in the manner of an actor in the part of Horatio, when he addresses Hamlet on the appearance of his father's ghost, “Look, my Lord, it comes.” I found that I had a very perfect idea of Johnson’s figure, from the portrait of him painted by Sir Joshua Reynolds soon after he had published his Dictionary, in the attitude of sitting in his easy chair in deep meditation, which was the first picture his friend did for him, which Sir Joshua very kindly presented to me, and from which an engraving has been made for this work. Mr. Davies mentioned my name, and respectfully introduced me to him. I was much agitated; and recollecting his prejudice against the Scotch, of which I had heard much, I said to Davies, “Don't tell where I come from.”—“From Scotland,”' cried Davies roguishly. “Mr. Johnson, (said I) I do indeed come from Scotland, but I cannot help it.” I am willing to flatter myself that I meant this as light pleasantry to sooth and conciliate him, and not as an humiliating abasement at the expence of my country. But however that might be, this speech was somewhat unlucky; for with that quickness of wit for which he was so remarkable, he seized the expression “come from Scotland,” which I used in the sense of being of that country; and, as if I had said that I had come away from it, or left it, retorted, “That, Sir, I find, is what a very great many of your countrymen cannot help.” This stroke stunned me a good deal; and when we had sat down, I felt myself not a little embarrassed, and apprehensive of what might come next. He then addressed himself to Davies: “What do you think of Garrick? He has refused me an order for the play for Miss Williams, because he knows the house will be full, and that an order would be worth three shillings.” Eager to take any opening to get into conversation with him, I ventured to say, “O, Sir, I cannot think Mr. Garrick would grudge such a trifle to you.” “Sir, (said he, with a stern look,) I have known David Garrick longer than you have done: and I know no right you have to talk to me on the subject.” Perhaps I deserved this check; for it was rather presumptuous in me, an entire stranger, to express any doubt of the justice of his animadversion upon his old acquaintance and pupil. I now felt myself much mortified, and began to think that the hope which I had long indulged of obtaining his acquaintance was blasted. And, in truth, had not my ardour been uncommonly strong, and my resolution uncommonly persevering, so rough a reception might have deterred me for ever from making any further attempts. Fortunately, however, I remained upon the field not wholly discomfited; and was soon rewarded by hearing some of his conversation, of which I preserved the following short minute, without marking the questions and observations by which it was produced.

“People (he remarked) may be taken in once, who imagine that an author is greater in private life than other men.  Uncommon parts require uncommon opportunities for their exertion.”

“In barbarous society, superiority of parts is of real consequence. Great strength or great wisdom is of much value to an individual. But in more polished times there are people to do everything for money; and then there are a number of other superiorities, such as those of birth and fortune and rank, that dissipate men's attention and leave no extraordinary share of respect for personal and intellectual superiority. This is wisely ordered by Providence, to preserve some equality among mankind.”

“Sir, this book (The Elements of Criticism, which he had taken up) is a pretty essay, and deserves to be held in some estimation, though much of it is chimerical.”

Speaking of one who with more than ordinary boldness attacked public measures and the royal family, he said, “I think he is safe from the law, but he is an abusive scoundrel; and instead of applying to my Lord Chief Justice to punish him, I would send half a dozen footmen and have him well ducked.”

“The notion of liberty amuses the people of England, and helps to keep off the tædium vitæ. When a butcher tells you that his heart bleeds for his country, he has in fact no uneasy feeling.”

“Sheridan will not succeed at Bath with his oratory. Ridicule has gone down before him, and I doubt Derrick is his enemy.”

“Derrick may do very well, as long as he can outrun his character; but the moment his character gets up with him, it is all over.”

It is, however, but just to record that some years afterwards, when I reminded him of this sarcasm, he said, “Well, but Derrick has now got a character that he need not run away from.”

I was highly pleased with the extraordinary vigour of his conversation, and regretted that I was drawn away from it by an engagement at another place. I had, for a part of the evening, been left alone with him, and had ventured to make an observation now and then, which he received very civilly; so that I was satisfied that though there was a roughness in his manner, there was no ill-nature in his disposition. Davies followed me to the door, and when I complained to him a little of the hard blows which the great man had given me, he kindly took upon him to console me by saying, “Don't be uneasy. I can see he likes you very well.”

In the summer of 1971, ætat. 26, I embarked on my first trip to the Far East.  With a long plane ride ahead of me, and with the STEM geek’s insecurity about my literary education, I thought I should take a good long classic book along to read.  At random I picked Boswell’s Life of Johnson.  It sucked me in like a neutron star, and I have been a Johnsonian ever since.

I have three or four editions of the Life, but the one I use most for reference and browsing is the Oxford University Press paperback in the “Oxford Standard Authors” series, 1970 edition.  It has the right balance of footnotes—useful but not distracting.