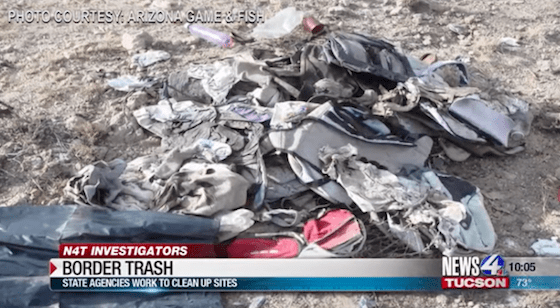 Border Trash Remains a Terrible Problem, Yet Gets Little Attention

It’s unfortunate that the intense political divisions today place issues strictly in one camp — liberal or conservative — when the real world breakout may be more complex. One prime example is illegal immigration enforcement, which the left declares to be the province of the cruel right that supposed wants to prevent non-white foreigners from entering by any means.

That’s nonsense of course. There are many reasons to enforce law and borders, one of which is environmental protection, a subject sometimes considered to be a value of Democrats. But because of political bifurcation and other complicating factors, the environmental threat has now largely disappeared from general discussion. Similarly, the alarming increase in world population — more than doubling from the 3.7 billion on the first Earth Day in 1970 to over 7.7 billion today — is no longer part of the immigration debate.

A growing Third World population is a major factor encouraging the millions of poor south of the border to try to enter the US to steal jobs from citizens, trashing the border along the way.

Last May Tucson’s KVOA-TV reported on the continuing border trash situation, from which the snapshot below is taken. 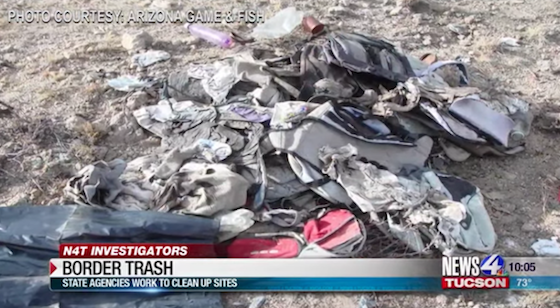 Recently Tucker Carlson interviewed the Secretary of the Interior about the environmental damage done to the border region by thousands of foreigners invading the country.

TUCKER CARLSON: Well, thanks to America’s border crisis, every year, tens of thousands of people come illegally across our southern border — immigrants, human traffickers, drug smugglers, in some cases. And they come into the desert along the U.S./Mexico border.

The fragile desert ecosystems there are damaged by that. That’s been known for a long time. If you cared about the environment, you would care about that. And yet, anyone who raises alarms is called names. We don’t care because we care about the environment and this country. A member of President Trump’s cabinet is here tonight to tell us about what the administration is doing in the face of this crisis. David Bernhardt is the U.S. Secretary of the Interior, and he joins us tonight. Mr. Secretary, thanks so much for coming on.

SECRETARY OF THE INTERIOR DAVID BERNHARDT: Thanks for having me.

CARLSON: So, this has been a problem acknowledged by Democrat and Republican administrations for a long time, for decades. And it’s a real problem. What is this administration doing to help fix it?

BERNHARDT: Well, the reality is that common sense says when you have tremendous trafficking, ad hoc trails, trash, debris, and fires, you have a lot of damage to native vegetation, wildlife, and to the ecosystem. And so —

CARLSON: Trash, debris, and fires? So, we’re not allowed to be concerned about that. But if you cared about the environment, that would be a concern, correct?

BERNHARDT: You sure would think so. Indeed. I went down and personally inspected a number of sites on the border. And the reality was that where we put a wall, we have habitat restoration taking place, environmental flora and fauna begin to come back instead of it being trampled. And the reality is the wall will provide additional environmental benefits. And that is simply a fact.

CARLSON: So, a huge percentage, I think at least half of the wildfires, the fires along that border, are caused by people here illegally.

CARLSON: Environmental groups don’t say anything about that.

CARLSON: Why don’t they?

BERNHARDT: Well, I think it doesn’t fit the narrative. I mean, the reality is those people that claim to be the most opposed to the wall also claim to be the most pro-environmental supporters out there. And this just doesn’t fit with our narrative. The reality is ad hoc trails, debris are extraordinary in the magnitude that they have on the public lands. And the public lands — we have wilderness areas that have essentially been destroyed by illegal activity. And —

CARLSON: The Sierra Club just sits there and says nothing as it happens?

CARLSON: Well, I mean, can you imagine a greater betrayal of their stated charge to protect the environment, to ignore environmental degradation like that?

BERNHARDT: Well, and more importantly, it’s something we can actually do something about. I mean, there are a number of environmental issues where you look at it and say, “Well, that would be really hard to solve.” Here’s one that we can actually have a solution. Lower the number of people coming across, provide the ground some restoration and get on with it. (Continues)