In Oakland CA, the International High School educates nearly 100 border surge kiddies, as noted in a typically diversity-positive story from PBS. We learn about all the special services the junior illegal foreigners receive, but no dollar cost to the taxpayer is given. They get free meals, special language classes and lots of psychological counseling for their huge mental health needs.

Below, diverse foreigners are urged not to hurt one another in a multi-lingual sign at Oakland International High School. 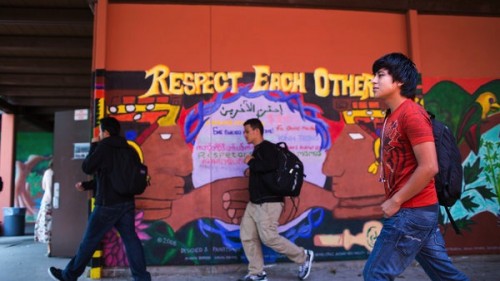 Its curious that a commonly cited reason for kids leaving Central America is gang violence, which they say they want to escape. So they come to Oakland (sometimes to be with illegal alien parents) which is a big gang town. Nevertheless we are supposed to forget their silly excuses and shower them with free stuff despite the needs of millions of Americans living in poverty, some number of whom reside in Oakland.

I wrote about Oakland International High School last year: Immigrant Students’ Soccer Field Grab Stomps Baseball Field of Dreams. It seems that newbie kids wanted to play soccer on a baseball field that was built by a neighborhood group at a cost of $400,000 raised by local folks. The soccer kids were allowed to use the field if they didnt wear cleats, which of course they did. The field was torn up and baseball-playing Americans were stuck with a damaged diamond, because immigrants with a sense of entitlement whined, It feels like we dont belong here, like its not our school. Thats how things roll in Diversifornia these days.

Watch the PBS segment for a couple seconds of Ric Oberlink from the Californians for Population Stabilization at 7:15:

Ever since a surge of unaccompanied minors crossed the U.S. border last year, many California schools have seen a flood of undocumented teens. Special correspondent Spencer Michels reports on how one school is learning to adapt to their new students and how Obama’s immigration announcement may change education systems nationwide.

HARI SREENIVASAN: Officials in this country have also been dealing with a surge in illegal immigration this past year, most dramatically when a wave of unaccompanied children and young adults flooded north across the U.S.-Mexican border last spring and summer. Many were detained and face possible deportation back to their home countries.

But, as special correspondent Spencer Michels reports, those who made it to American cities face other challenges in their new lives.

SPENCER MICHELS: Nearly 100 miners who came to the U.S. without their parents make up about a quarter of the student body at Oakland International High School in California. Altogether, nearly 60,000 unaccompanied minors were caught at the border this year.

Most are from Honduras, Guatemala, and El Salvador. Protests both for and against the Obama administration immigration policies greeted their arrival. When apprehended, many of them claimed fear of gang violence and persecution in their home countries, so they were allowed into the U.S., pending a hearing in immigration court.

But, in Oakland and in some other California cities, there was little debate over whether to welcome them.

CARMELITA REYES, Co-Principal, Oakland International High School: These are children, period. And so what their legal status is, is immaterial. They’re students. They deserve an education. So I’m part of that system that is the safety net for these children.

SPENCER MICHELS: There’s a network of schools like Oakland International High in several American cities, but the politics of the immigration debate are largely ignored in these schools, where the emphasis is on teaching English and other subjects and on taking care of the kids.

Seventeen-year-old Yefrey Cinto Blanco is new at the school, just starting to learn English. He grew up in Guatemala, where he says violence and danger were commonplace.

YEFREY CINTO BLANCO, Student (through interpreter): It’s a violence that emerges from the communities and it keeps getting bigger and bigger, and sometimes people are killed because of this problem.

SPENCER MICHELS: Today, Yefrey takes a full load of classes. Topics like history and math are taught in English and the students, who speak 35 different languages, learn from each other.

CARMELITA REYES: We don’t have desks. We have tables, and we have very purposeful groupings, so that there’s some language diversity at the table, a student from Asia and a student from Central America at the same table. And so English becomes the common language of that project or that group discussion.

SPENCER MICHELS: But, for this population, Oakland schools can’t concentrate solely on education. Almost all get free or low-cost meals paid for by the federal government. And the district has hired an unaccompanied minor specialist and others to concentrate on the psychological, social and immigration problems facing the new arrivals.

LAUREN MARKHAM, Oakland International High School: Let’s go. Where do you have to go?

LAUREN MARKHAM: Because these students aren’t with their family members and because they have faced a tremendous amount of trauma, there’s huge mental health needs, so needing to see a counselor, to see a mentor, to be engaged in sports or after-school programs.

SPENCER MICHELS: Among her charges is Carlos Sura, a senior at International, who made his way to the U.S. from El Salvador with just his younger sister.

CARLOS SURA JR., Student: They were recruiting young kids to join the gangs, and like — I was, like, I don’t want to be a part of that, because then, when they put you in it, they — there’s no way back to — for you to get out. Got to go to church every day, or, otherwise, they are going to kill you.

SPENCER MICHELS: After being caught near the border, he and his sister were sent to live with their parents in Oakland while waiting for an immigration hearing.

Carlos’ father and then his mother had come to America without documents years earlier, leaving Carlos and sister, Tanya, with a grandmother. They live with younger siblings born here in a few crowded rooms in East Oakland, a neighborhood where gangs flourish, just as in El Salvador.

Carlos Sr., who works as an unlicensed barber, would like to get a work permit. He was encouraged by President Obama’s recent announcement on immigration.

SPENCER MICHELS: For his son, it’s been worth the fear and the struggle. He wants to be an accountant.

CARLOS SURA JR.: My plans are to start going to college next year after I graduate from high school, get a career, help my family.

SPENCER MICHELS: At the U.C. Berkeley Law School, Allison Davenport studies and handles family immigration cases in the International Human Rights Law Clinic. She says the immigration challenges faced by the Sura family are complex and uncertain, but not unusual.

ALLISON DAVENPORT, UC Berkeley School of Law: That’s a very common scenario. So, the parents are undocumented. The children who were born in the U.S. are, by law, U.S. citizens. And then the recently arrived children are — likely have cases pending in immigration court.

Now, the parents, because they do have the U.S. citizen children, may be eligible under this new deferred action for parents program announced by President Obama on November 20.

SPENCER MICHELS: As for unaccompanied minors like those at International High, Davenport was disappointed President Obama didn’t directly address that issue.

ALLISON DAVENPORT: Asylum claims are very difficult to win. You have to show not just that you have a fear of return to your home country, but it’s connected to one of the five protected grounds under asylum law, which is race, religion, political opinion, membership in a particular social group, or your nationality.

LAUREN MARKHAM: A ton of my work this fall and last spring has been trying to find lawyers for these students. When an unaccompanied minor crosses the border and is caught, they are immediately put into removal proceedings or deportation proceedings. So, they’re going to be deported unless they can show a reason that they have legal grounds to stay.

SPENCER MICHELS: That’s the way it should be, argues Ric Oberlink, an environmentalist and an active member of Californians for Population Stabilization.

He says cities or schools providing services for illegal immigrants just encourages others to come.

RIC OBERLINK, Californians for Population Stabilization: When you provide benefits, when you provide incentives, you’re going to increase the flow and you’re going to put more people onto this perilous journey. It’s just wrong. We have a very generous immigration policy, but we can’t be open to just anybody walking across the border. Eventually, most of them should be returned.

SPENCER MICHELS: The U.S. deports 400,000 people a year. So far, none of the unaccompanied minors at Oakland’s International High has been removed.

Meanwhile, the school is not anticipating another surge of students, but will figure a way to take care of them should they materialize.