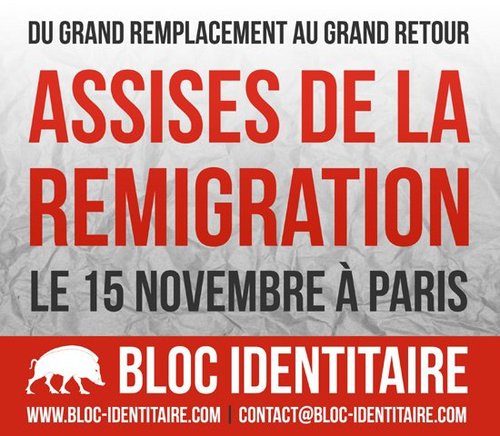 In an email I received from VDARE.com friend Takuan Seiyo, he writes about the November 15th conference in Paris of Bloc Identitaire (see poster announcement above). His email's subject line is "From the great (population) replacement to the great return (back to Africa and Muzland)," and he explains:

They say in the linked article that the re-migration is to include not only immigrants but their descendants too, as "the only option to assure a peaceful future, not only the identity, of France."

There are several ways of reading that word, "peaceful," and that's good. I like that wild pig symbol, too.

(The linked article is in French.)

Bloc Identitaire is described at Wikipedia as "a regionalist nativist French and Europeanist activist movement," which sounds about right, except that it leaves out the immigration-driven provocations that have made its development organic politically.

Bloc Identitaire and its "youth wing" Generation Identitaire have received some prior coverage here at VDARE.com, and the range of provocations are well illustrated in a five-minute video from 2011, which includes an interview with Philippe Vardon, a spokesman for Bloc Identitaire:

Google's translation of the conference announcement includes this:

It's not a new idea. At least by 2005, Steve Sailer was suggesting that Europe 'pay its Muslim immigrants to go home.' And the late, lamented Lawrence Auster, in his masterful 2009 speech A Real Islam Policy For A Real America, suggested, similarly, that Islam must be removed from America if our own civilization is to survive.

The core of Larry's speech was an imagined address to the American people by a future U.S. president who was not in thrall to today's liberal verities. In part of the speech, the president also spoke to Muslims worldwide:

Now that I have spoken to the American people about the steps we must take to preserve our freedoms and our very nationhood, I would like to speak to the Muslims of the world who are listening to me tonight.

I repeat that I have no ill will against you as people. I act with no animosity. I act in recognition of reality. And the reality is—and you know it, and now you know that we know it—that your religion commands you to make all peoples and societies submit to the Islamic law, wherever and whenever you have the power and opportunity to do so.

And one of the opportunities that have been presented to you is immigration. A half century ago, when we of the West began to admit large numbers of Muslim immigrants, we were, though we did not realize it, replicating what the city of Medina did in the year 622 when it invited Muhammad and his followers to emigrate there from Mecca. The most famous event in the history of Islam, the event with which the Islamic calendar begins, was an act of immigration. Muhammad and his followers moved to Medina, and within two years he had become the dictator of Medina, and Islamic law ruled in that city. That is a paradigm of Islamic expansion.

When we invited you Muslims into the West, we were, without knowing it, imitating what the Medinans did 1,400 years ago. You saw the significance of what we were doing, and you couldn’t believe the opportunity that we had handed to you. You had never imagined that we would do this. But we did it, we gave you the opportunity. And now we have to close off that opportunity by reversing the policies that brought you here.