There is no question about it: Milwaukee has America's worst black population. Like virtually any American city with a large black population, simply admitting that the individual blacks collectively represent a massive liability (instead of the imaginary asset we pretend them to be) to the future of Milwaukee would be the first step toward restoring sanity there. 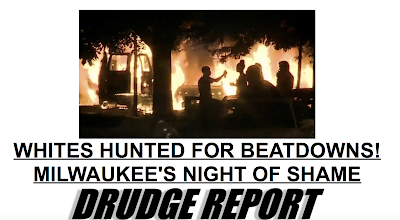 August 14, 2016: another date and event Jim Crow tried to prevent

Instead, we must watch as every police encounter with a black male (since blacks commit so much crime in America, they are almost the only people cops ever encounter for potential arrests) risks a spontaneous explosion of blackness.

Here's the background of the black male that blacks collectively rioted over in Milwaukee on August 13, 2016 (remember, the black population—and its growth—in Milwaukee is largely supported by your tax dollars).

The man shot and killed by a Milwaukee police officer Saturday was charged last year in a shooting and then charged again, with trying to intimidate a witness in that same shooting, the Milwaukee Journal Sentinel has learned.

Smith was charged with first-degree recklessly endangering safety and with witness intimidation, but the charges were dismissed, court records show.

The charges were dropped even though the prosecutors had recorded jail calls in which Smith asked his girlfriend to pressure the victim to recant, according to court records.

In the witness intimidation case, Smith was accused of pressuring the victim in a shooting to recant a statement identifying him as the suspect, according to the criminal complaint.

Prosecutors with the Milwaukee County district attorney’s office were not immediately available Sunday to explain why the charges were dismissed.

Milwaukee police say Smith was armed when he fled a traffic stop about 3:30 p.m. Saturday near W. Auer Ave. and N. 44th St. The officer ordered Smith to drop his gun and when he did not, the officer fired and wounded the man in the chest and arm, according to preliminary information provided by Mayor Tom Barrett.

Mildred Haynes, Smith’s mother, said police have told her very little so far about the death of her son, who is a father to a 2-year-old boy.

“My son is gone due to the police killing my son,” she said Sunday. “I am lost.”

Haynes said her son does not have a felony record but acknowledged he had been arrested. Online court records show Smith has one prior conviction for carrying a concealed weapon, a misdemeanor.

Smith was charged with first-degree recklessly endangering safety, a felony, on Feb. 3, 2015. Details of the shooting were not immediately clear from the documents.

While that case was pending, Smith was charged with felony witness intimidation after prosecutors said he was intimidating the victim in the first case.

According to the criminal complaint in the intimidation case:

Smith called his girlfriend from jail and instructed her to call the victim and tell him to fill out a sworn affidavit saying Smith did not commit the crime. He called at least two other times and urged her to continue leaning on the victim, saying: “Stay on dude” and “When they get this letter, this (expletive) gone, then my case should be out of here.”

The victim ultimately did file a statement recanting his identification of Smith as the shooter. Prosecutors moved to dismiss the witness intimidation charge in September  2015.

The shooting case moved forward to a jury trial in November 2015, but it ultimately was dismissed when the victim did not show up and was uncooperative, according to online court records.

Smith’s mother, Haynes, said her son had gotten his conceal-carry license because he had been shot twice and robbed four times – and was stripped of all his clothes during one robbery.

Smith should have been in jail for his crimes, but because our judicial system is overwhelmed with black criminality, he slipped through the cracks (it should be noted that  almost every homicide/nonfatal shooting in Milwaukee has a non-white suspect).

And what happened when he slipped through the cracks? Spontaneous blackness, with the sheer hatred black people have white people coming out in an unfiltered rage captured by the new media before the old Main Stream Media could spin what happened.

Race agitators in Milwaukee used the police shooting of an  armed black man to burn down their city and attack white people.

Several videos show white drivers being stopped in the middle of the street and the “protesters” attempting to pull them out of their vehicles.

When the mob spotted a white driver, they attempted to block his car from passing.“He white! Beat his sh*t!” the man yelled.

Agitators could be seen destroying cars. They hit this one with cinder blocks and looted the truck, leaving its contents strewn on the street.

“Black power in this mother f*cker, man!” one person shouted.

23-year-old Sylville Smith should have been in jail, but he was able to intimidate a witness to recant their statement. Inadvertently, this action has now helped (in his death) show white people that blacks will never, ever judge them by the character they display, but only the color of their skin.

The clip shows angry rioters chanting “black power!” before asking “is they white?” as cars slowly drive past.

“Yeah they white!” states someone else, prompting the mob to run towards the vehicle.

“Yeah they white, get their ass!” screams another.

“Hey they beatin’ up every white person!” exclaims another rioter.

The footage appears to show the mob attacking cars and trying to drag out the drivers.

The footage then cuts to an upper floor window before the person shooting the video states, “I think they just beat some white bitch ass for no reason – they bust open the window.”

Local reporters were also targeted for violent assaults, including a Milwaukee Journal-Sentinel reporter, who was “thrown to the ground and punched”.

WTMJ was forced to pull its reporters from the ground altogether because of violent threats from the mob.

In another clip, rioters are seen burning down a gas station while chanting “black power!”

It's like Kevin Costner said in The Guardian: "Save the ones you can... The rest, you've got to let go."

This story, showcasing the type of black individual that other black individuals will collectively riot/burn/loot/and attack white people over should represent a clarifying moment for even those minds still marinating in the hilariously idiotic message of "Hillary's America."

If you're too obtuse to realize this fact after reading this, there's no helping you out and you'll end up being attacked in the future by a black mob. And, sorry, quoting from "Hillary's America" or about how enterprise zones or school vouchers are the answer, or how Democrats are the real racists for constructing Jim Crow won't save you.

Indeed, Jim Crow was instituted to save white people and their civilization from the horror of what happened on August 13, 2016 in Milwaukee.