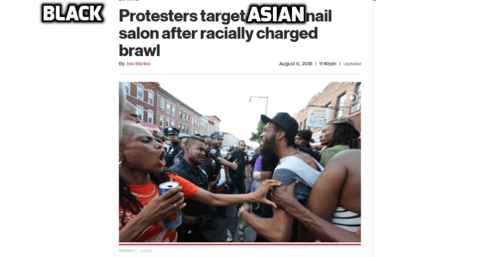 Black Women Chant "Where Is ICE?" At Korean Nail Shop—Somehow This Must be the Fault of Beckys

The NYT has recently taken to heavily promoting rather dull videos of white women, or, as the NYT calls them, “Beckys,” feeling insecure and calling the cops on blacks, showing just where white women stand on the Pokemon Points diversity totem pole.

But, as I pointed out recently in Taki’s, there are much more entertaining videos of the World Star Hip Hop ilk just waiting for national media attention. So today, from the New York Post:

Protesters in Brooklyn — some chanting “where is ICE?” — besieged a second nail salon Monday that they believe is connected to the shop where customers brawled on video with employees last week — forcing cops to escort the workers out for their own safety.

It wasn’t immediately clear if the two salons are related. But police were ready for protesters and were inside the business when they arrived at about 6:30 p.m.

Demonstrators angrily chanted, “shut them down,” “f–k the police” and “no nails, no toes, these racist shops have got to go.” At least one protester screamed, “where is ICE (U.S. Immigration and Customs Enforcement)?” implying that the salon’s Asian employees might be undocumented immigrants.