Black South African Immigrant Serial Killer Suspect Muziwokuthula Madonda Has Confessed to One Murder, but the Sky's the Limit 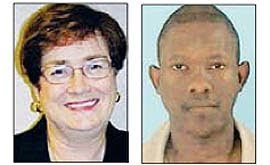 During three years of crisscrossing the country, this mope traveled through 18 states, often on contracts installing satellite TV dishes. He's been charged in three murders so far, with a fourth murder indictment on the way in Ohio. Forget four suspected murders; the sky's the limit.

If I were heading up this investigation, I'd fax his picture and information about him to the FBI and, assuming he hadn't mentioned Alaska or Hawaii, the state police agencies for the entire lower 48, asking them to consider him for any unsolved robbery-homicides in which the m.o. at all resembled his. I'd also get as much of a self-report from the guy and his employers on exactly where he'd been and when, and contact LEOs in those localities.

Note that if the guy murdered the four victims cited, he is not very bright about finding victims with large amounts of cash, and at the same time is utterly profligate at taking life. His first known victim—he confessed to murdering Jacquelyn Hilder—was his black only friend's white live-in lover. Such a mobile, conscienceless psychopath could be a killing machine. (Transience and serial killers go together.) This profile does not mesh at all with the depiction below of a conscience-wracked Christian who had been "desperate" for money, which sounds like something the homicide detectives came up with to put a human face on a monster, but it does mesh with things I've heard and read from the likes of Gedahlia Braun on black African "morality." For all we know, his parents could be long gone.

I note with skepticism Madonda's claims to have studied engineering and theology. He doesn't sound nearly intelligent enough to study engineering, though it is possible that he was accepted via affirmative action, and if he studied theology, it was likely only as a front.

It wouldn't surprise me a bit to learn that he had murdered people in his native South Africa, but with law enforcement virtually non-existent in the Rainbow Nation, I would not count on our ever learning the truth.

Look for the national MSM to suffer one of their usual attacks of disinterest, where a black serial/mass murderer is concerned, unless they can somehow play a marked race card (apartheid, anyone?), in order to absolve the killer of his crimes, a la Omar Thornton.

An immigrant who studied ministry and traveled the United States in search of riches for his impoverished parents in South Africa is suspected in four homicides, including this winter's slaying of a FirstMerit executive in Akron.

Muziwokuthula Madonda, 33, is a suspect in a string of homicides that started with the February robbery and shooting death of bank Vice President Jacquelyn Hilder.

Madonda was arrested in Texas on March 27 after fleeing New Mexico, where he is suspected in the robbery and slayings of two men whose bullet-riddled bodies were found stacked atop each other in a motel room.

Police say Madonda is also a suspect in the Dayton-area shooting death of a 25-year-old South Africa native whose body was found two days after Hilder was killed.

Detectives believe Madonda, who studied theology at a Georgia seminary after arriving in the United States in 2008, confessed to the slayings [NS: "Slayings"? I thought he only confessed to one.] to clear his conscience.

''He wanted to cleanse his soul so he can try to get his way back into heaven,'' Schaeffer said. [This sounds like an unusual take on Christian theology. Must be a black thing.]

Madonda, who also studied engineering in the United Kingdom, first settled in New Jersey about three years ago. In all, he told detectives, he visited 18 states during his travels, determined to make his wealth at a young age and help his ailing parents.

''He wanted to make life better for his parents,'' Bell said. ''He wanted to be a success by age 30, and he felt he was a failure because that didn't happen.

''So he decided to start taking shortcuts. That was one of his motivations [in the robberies and slayings].''...

Victor Browne, who lived with Hilder, said during a phone interview Thursday from Louisiana that Madonda was a quiet, religious man who attended church every Sunday.

Browne, 64, said he met Madonda about three months ago when they roomed together for four weeks in North Dakota, where both took on satellite TV installation contracts.

Browne, a native of St. Kitts, said he tried helping Madonda learn the satellite TV business and life in the United States. But instead, he believes, Madonda studied Browne's lifestyle and learned Hilder, a 60-year-old divorcee with one adult daughter, was wealthy and potentially vulnerable.

''I was shocked when I found out it was him,'' Browne said. ''It hurts more that it was someone I tried to assist. I'm totally devastated. I'll tell you, I will never help another person.''

Detectives believe Madonda, desperate for money, was en route to Akron to begin work on a new satellite TV contract when he conceived his plan to rob Hilder.

Through conversations with Browne, he knew the businessman planned an overnight visit in Michigan to attend a meeting.

''Basically, [Madonda] needed money and he figured that since she's a vice president of a bank, she must have money,'' police Detective Lt. David Whiddon said. ''And obviously, he knew Victor Browne would not be there.''...

''Jackie dropped her guard for the first time in her life and it cost her,'' Browne said. ''Normally, she would never open that door.''

Detectives say once he talked his way inside the home, Madonda tried to rob the bank vice president.

Madonda guessed wrong about Hilder's on-hand cash. She had little or no money at her home.

At some point, police believe, Madonda drew his revolver and fired a shot at the executive, at one point briefly chasing her through the condominium.

Hilder, dressed in her night clothes, suffered two gunshot wounds– one to the abdomen and a final injury to the chest as she lay on the floor.

Browne, who discovered Hilder's body when he returned home Feb. 18, remembers talking to Madonda a day or so after the killing. In a phone call, he told Madonda of Hilder's death and his plans to cancel a business contract.

Madonda surfaced again, working another satellite TV contract hundreds of miles away in Tucumcari, N.M. There, authorities said, Madonda roomed in a motel next to Gabriel Baca, 37, and his stepfather, Bobby Gonzales, 57.

On March 24, the bodies of the two men were found atop each other in their motel room bathroom. Both were shot to death.

The men were last seen four days earlier, about the same time Madonda checked out of his room and left New Mexico in a 1996 Chevrolet Astro van, authorities said.

Arrest warrants were issued, and Madonda was tracked down to Conroe, Texas, where he was taken into custody outside a Denny's restaurant March 27, state police said….

Madonda is charged in Akron with aggravated murder, aggravated robbery and aggravated burglary. He is also charged with two counts of murder in New Mexico….

''I'm still in shock that it is him,'' Browne said. ''A fleeting meeting and he comes and shoots my woman like that. I cannot believe it.''

Update from my reader-researcher David in TN:

I just did a Google search and found only a few news items. Each killing seems to have been different in type of victim and scenario. As you wrote, no telling how long this has been going on.